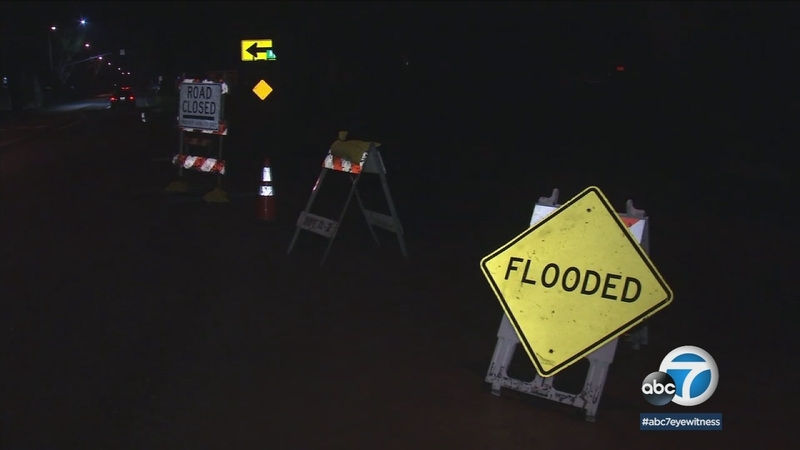 Mandatory evacuations went into effect Tuesday and were expected to last until Thursday evening for thousands of residents living near areas impacted by the Thomas, Sherpa and Whittier fires. Residents in the Alamo burn area were under a recommended evacuation warning.

The National Weather Service said there is a significant risk for a debris flow below the Thomas Fire burn area. The hillsides were holding up, but more rain was expected to fall throughout the day.

Flood Advisory in effect for Southern Santa Barbara and Western Ventura County where moderate rainfall is occurring. Observed hourly rainfall rates with this band of rain have been around 0.45" per hour. #CAwx #LArain #CAstorm #LAweather #AtmosphericRiver #SoCal pic.twitter.com/wHlYn5i4ft

"If it's two days and it's long and steady, that's fine. That's what we always need, is lots of rain, but if it comes down in a downpour, the hills won't be able to hold up," said Ventura resident Jenny Simpson.

Fellow resident Kelly Decklever said she planned to pack up and be ready to evacuate just in case.

Sandbags lined several area streets, and plastic covered the hillsides. The fear is that a sudden downpour will trigger debris flows.

Further north, State Route 33 was closed north of Ojai between Fairview Road and Lockwood Valley Road in the Los Padres National Forest due to mud and debris on the roadway, according to Caltrans.

Montecito residents, who saw a devastating mudslide in January, still prepared for the hardest rainfall that is expected to come Thursday.

Santa Barbara County Search and Rescue teams and other agencies were deployed to the Montecito Creek earlier Wednesday to monitor the area for possible emergencies. An Eyewitness News crew stationed in the area heard boulders moving in the hillsides due to the rain and relocated for safety.

Just over two months ago, rain triggered deadly mudslides in Montecito. Given similar weather conditions, it could happen again.

"The problem is, the burn was there and the soil isn't holding the water, and we saw that happen here on Jan. 9. When that happened, there's just nothing to hold the water," said Jack Franklin, an engineer with the Santa Barbara Fire Department. "If we have a big amount of rain coming down in a short period of time, we're going to get essentially a flash flood."

If a mudslide does happen again, it's not necessarily going to follow the same path as it did in January. Residents are aware that if their homes were safe the last time, that may be different this time around.

The Red Cross set up an evacuation center at the Earl Warren Showgrounds, Warren Hall, 3400 Calle Real, Tuesday for those having to leave their homes.