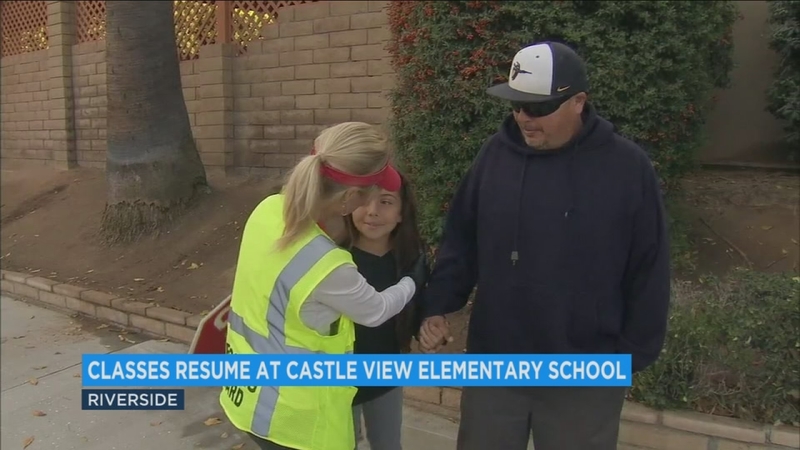 RIVERSIDE, Calif. (KABC) -- It was the first day back to school for students at Castle View Elementary in Riverside.

You can see a sign hanging over the front office that reads, "Castle View Courage," and notes hanging on the front gate prove this campus is not alone.

It was last Tuesday, on Halloween, when first-grade teacher Linda Montgomery was held hostage for hours by an irate parent. She survived.

The disgruntled father, Luvelle Kennon, was shot and killed by SWAT officers.

"We thought it was a drill, but like five minutes later they said, 'This is not a drill.'"

Student Joshua Dominguez-Wales said he's grateful for the other teachers who responded.

As Riverside police continue the investigation, their officers increased their presence on campus Monday, offering a sense of security to students and parents.

"I know my kids are ready to come back so I'm excited they get to come back to some normalcy. Everyone wants to come love and support us, and I think this was perfect," said parent Leah Stuart.

As Stuart's son and others went into class, she was among a group of parents who stood in prayer, a sign of unity in this community.

The teacher involved released a statement, saying in part that she was thankful that no children at Castle View were injured.

"I feel compassion for Mr. Kennon's daughter, a student in my class, and for her family during their healing process as they cope with this tragedy," Montgomery said.