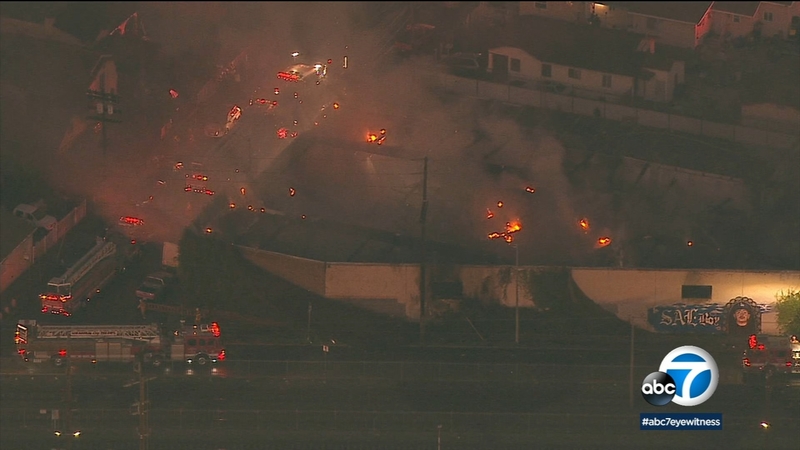 SOUTH LOS ANGELES (KABC) -- Raging flames and thick black smoke rose into the sky Tuesday morning as a fire ripped through a one-story commercial building in the Central-Alameda area of South Los Angeles.

Crews responded at 3:39 a.m. to 2700 S. Long Beach Ave., near 24th Street, and found heavy fire coming from the building, according to Nicholas Prange of the Los Angeles Fire Department.

The fire was upgraded at 4:30 a.m. from a greater alarm structure fire to a major emergency structure fire, and the 144 firefighters assigned continued a defensive battle against the flames using ladder pipes and large hose lines set up along the perimeter of the building while leaving room for a potential building collapse, Prange said.

There are homes nearby, but there were no immediate reports of evacuations.

AIR7 HD was over the area as the building's roof collapsed.

A knock down of the bulk of the fire inside the 21,711-square-foot building was called at 5:27 a.m. and crews would remain on scene to extinguish hot spots. LAFD heavy equipment crews were called in to safely move debris to allow firefighters to snuff out any remaining flames, Prange said.

Metro A (Blue) Line service between the Vernon and Washington stations was halted because of the fire. Buses would transport passengers between the two stations until further notice, Metro said.

It was not immediately clear what sparked the fire. LAFD Arson/Counter Terrorism investigators responded to the scene.