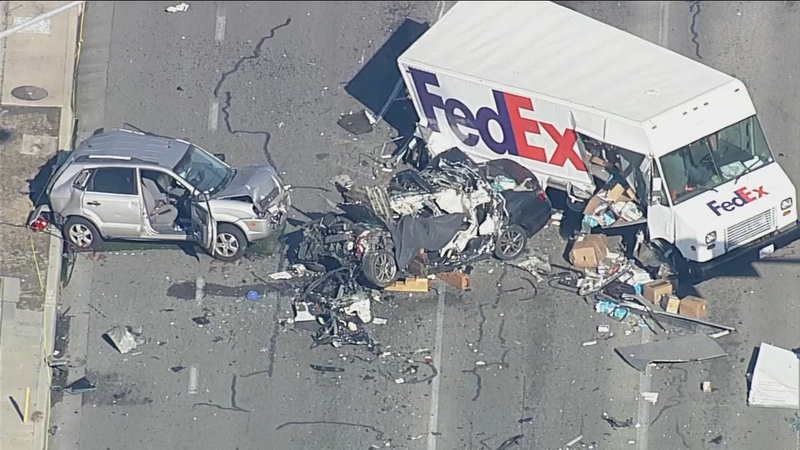 Six vehicles, including a FedEx delivery truck, were involved in the pileup shortly before 9 a.m. at the intersection of South Street and Bloomfield Avenue, a Los Angeles County Sheriff's Department spokesperson said.

Several occupants were trapped inside their vehicles after the crash, which prompted a massive response from firefighter-paramedics and LASD deputies. One of the injured survivors was transported to a hospital in unknown condition, the L.A. County Fire Department said.

Video from AIR7 HD showed a dark-colored sedan mangled almost beyond recognition after it apparently T-boned the right side of the FedEx truck. Several packages and debris were scattered nearby.

Sheriff's investigators said the collision occurred after one of the drivers failed to stop at the intersection, adding that no skid marks were found on the asphalt. No citations or arrests were announced Wednesday morning.

A mother and her teen daughter were killed during a violent crash in Norwalk on Sunday caused by a driver who is suspected of DUI, according to deputies.

The crash was recorded by the dashboard camera of a vehicle that was not involved, the LASD spokesperson said. The footage was not immediately released.

The intersection remained closed as the investigation continued at the scene.