The sheriff's department tells Eyewitness News a woman was speeding when she T-boned the car carrying the mother and the girl.
KABC
By Anabel Munoz 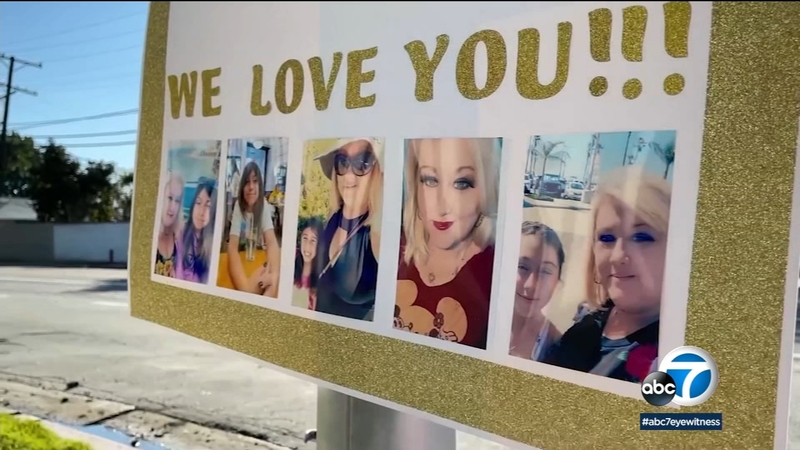 NORWALK, Calif. (KABC) -- A mother and her 13-year-old daughter were killed during a violent crash in Norwalk on Sunday.

It happened just after 10:30 a.m. near the intersection of Foster and Studebaker roads.

The sheriff's department tells Eyewitness News a woman was speeding when she T-boned the car carrying the mother and the girl. The two were taken to the hospital where they later died.

The woman who crashed into them is suspected of DUI, according to investigators, and has since been arrested. She has not been identified by authorities.

Meanwhile, a memorial full of flowers and candles has since been created at the crash site, which features photos of the mother and teen.

Though their names haven't been officially released by deputies, a GoFundMe account provided to Eyewitness News identified them as Shannon and Ashley Alvarez. Ulloa said her cousin, Shannon's boyfriend of several years, created the account to help Shannon's mother with funeral expenses

One friend said the two had just stopped by a Starbucks shortly before the crash and were driving past a church they would attend sometimes.

Jazlyn Barrientos, who is 10 and was a friend of the teen, described the girl as creative and a lover of flowers.

"She had a very strong connection with her mother," she told ABC7 on Monday. "I really liked how they would get along together. Like, her mom was to take her everywhere with her. She liked the color purple so I bought her a lot of purple flowers. She was very helpful."

According to Barrientos's grandmother, Maria Ulloa, the teen's father died last year due to COVID-19.

"She was a very polite little girl," she said of Ashley. "Even though she was only 13, she was very childlike."

Ulloa said the mother was an only child.

For more information on how you can help this grieving family, visit the mother and daughter's GoFundMe page.