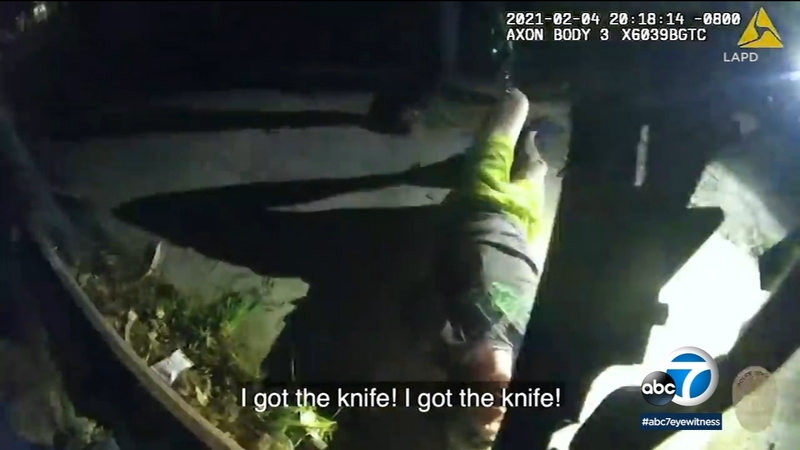 The assault with a deadly weapon suspect -- identified as 37-year-old William Wolcott -- led police on a chase across the San Fernando Valley on Feb. 4 that took a number of unexpected turns.

The suspect's vehicle crashed through a chain-link fence and slid down a hillside in Woodland Hills before coming to a stop, but he refused to come out of the car, prompting an hours-long standoff.

Video shows a police dog help take down a suspect after an hours-long barricade on a grassy hillside in Woodland Hills. The standoff unfolded after a dramatic police chase.

"When the gas goes in, he's gonna roll the window. He's going to crawl out and fall down right here," one officer can be heard explaining.

"It's going to be hard for him to go that way. He's going to have to climb out," another officer responds.

Tear gas eventually forced the driver to flee the vehicle.

"Let me see your hands! Lemme see... he's got a scissors. Hands!" an officer shouts.

An officer on the video can be heard shouting that Wolcott had a razor blade in his hand.

The suspect then takes off on foot, running up the hill.

A closeup from an officer's body camera shows a weapon in the man's hand.

Officers sent in a K-9 that latched onto the man, who then went rolling downhill. Wolcott eventually jumps through a hole in the fence, still refusing to follow officers' commands. Multiple officers used a Taser and took him into custody.

Wolcott could be heard shouting on the body camera video as officers continued to give commands.

Police released an evidence photo of the knife they say was recovered at the scene.