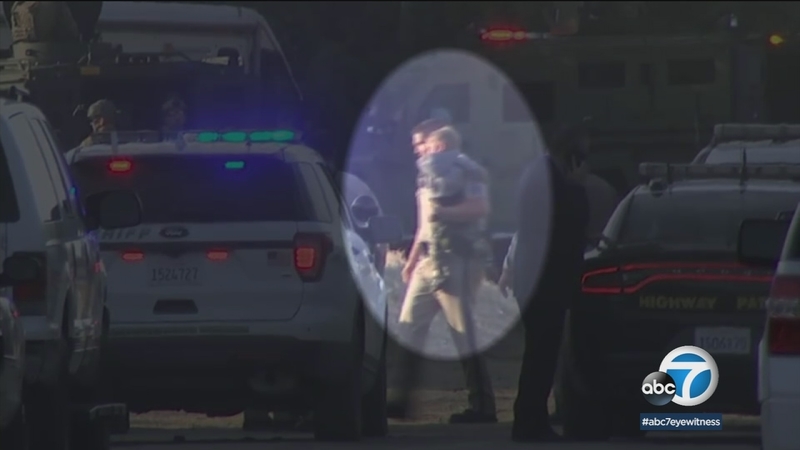 LOS ANGELES (KABC) -- Police chased a possibly armed domestic violence suspect in an RV who had two young children with him for more than four hours from Los Angeles to Kern County.

The chase began in the mid-Wilshire area and ended up on a dirt road in rural Shafter, just outside of Bakersfield.

The two children with the suspect were safely recovered, but he was not inside the vehicle. A search was ongoing and continued into the late night hours before breaking down a search perimeter.

Domestic violence suspect Stephen Houk pictured, left, in an undated image provided by CHP and, right, in a mug shot from the Marion County Sheriff's Office in Oregon.

The suspect, later identified as Stephen Houk, 46, was believed to have been involved in a domestic violence incident and had been chased earlier in the day by sheriff's deputies in the Santa Clarita area, until that pursuit was canceled.

Officials said there were two children, ages 11 months and 3 years, in the RV and the suspect was armed with a gun. Authorities said the children are Houk's. The mother of the children reported the domestic violence suspect to deputies.

Police said Houk is a registered sex offender from Oregon who is on parole for a sex offense. Oregon court records indicate he was convicted of one count of sodomy in 2002.

Police were chasing an armed domestic violence suspect in an RV and one or more children were believed to be with him.

He was spotted later in the day around 2:30 p.m. and a new chase began. The suspect fled on surface streets at normal speeds in the mid-Wilshire district heading toward the Hollywood area.

The suspect later entered the 101 Freeway and then the 170 heading northbound in the San Fernando Valley.

He then switched over to the northbound 5 heading through Santa Clarita, Castaic and Newhall. He was driving at normal freeway speeds in the 60-70 mph range in moderate traffic on the 5, with some light rain falling.

He continued on the 5, eventually reaching Kern County and authorities there were enlisted to help with the pursuit. He eventually switched to the 99 heading north and went through Bakersfield, exited onto surface streets and then returned to the 99 in the southbound direction.

He got back on the 99 and headed north to Shafter and continued the chase more than four hours after it started.

Both Children have been found safe & uninjured. Manhunt for suspect underway...
Armed Parolee at Large Pursued by Law Enforcement from Hollywood to Bakersfield... https://t.co/0nv9vPgDGP #LASD pic.twitter.com/GswQu4I46h

By around 6 p.m. the RV stopped on a dead-end rural road in Shafter. CHP officers and SWAT teams approached the vehicle and appeared to be attempting to negotiate with the suspect.