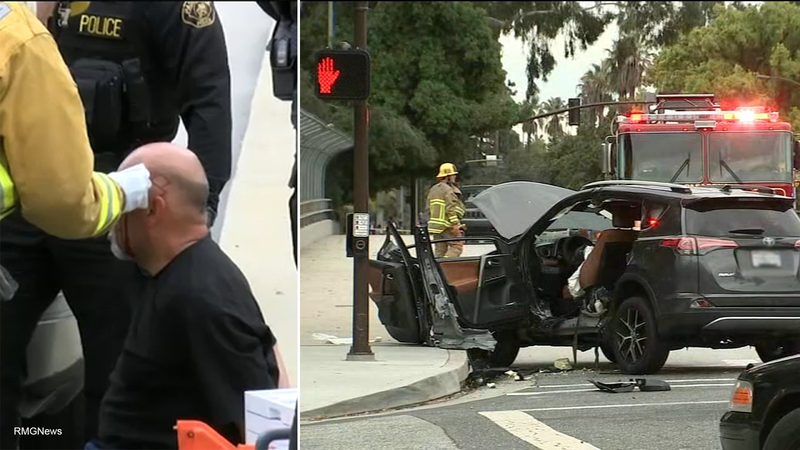 VIDEO: Chase ends in crash with civilian SUV in Pasadena

PASADENA, Calif. (KABC) -- A chase suspect was arrested for leading an erratic pursuit through several Los Angeles County cities before crashing into an SUV at a Pasadena intersection, injuring the driver inside.

The suspect blew through several intersections, narrowly missing several other vehicles on the road.

The driver, in a stolen utility truck, made sharp turns, losing some patrol units that were following close behind.

The chase reportedly started in the Bell Gardens area, went through Pico Rivera, Montebello and East Los Angeles before going into other cities such as Monterey Park, South Pasadena and Pasadena.

While in East L.A., the driver drove at speeds up to 60 mph on surface streets, making wide turns while traveling on the wrong side of the road at times.

The driver briefly drove onto a sidewalk to avoid stopped traffic in the Monterey Park area.

The suspect sped up to 80 mph on Garfield Avenue as he continued to swerve around traffic.

At one intersection in Alhambra, the suspect hit the back-end of an oncoming vehicle.

Patrol units appeared to have trouble keeping up with the suspect while he was on surface streets.

While in South Pasadena, the driver got onto the southbound 110 Freeway. The suspect quickly got off the freeway in the packed streets of the Highland Park area.

The Los Angeles Police Department appeared to catch up to the suspect for a brief time but then canceled the pursuit due to the dangerous driving.

#pursuit south Pasadena PD has engaged the pursuit. Now he’s back on the 110. And back off. pic.twitter.com/ZePoln12tK

In the South Pasadena area, the suspect drove right through train-track guardrails that were down just seconds before a train flew by.

A chase suspect plows through train-track guardrails just seconds before a train drives by in the South Pasadena area.

The suspect continued on and hit a parked car before getting onto another major surface street filled with traffic.

Police appeared to re-engage in the chase before the suspect got onto the northbound 110 Freeway.

The suspect got off the freeway and continued to travel at high speeds on surface streets.

Speeds de-escalated slightly to about 40 mph while in the city of Pasadena.

The suspect got onto the eastbound 134 Freeway and then westbound 210 Freeway.

The driver got off of the freeway in the Pasadena area and drove at speeds of about 53 mph when he blew through an intersection and struck a black SUV from the side. The crash happened at the intersection of Orange Grove Boulevard and W. Holly Street.

Video shows a chase suspect slam into a civilian SUV at a Pasadena intersection on Thursday.

Firefighters were watching the chase on television and arrived in seconds.

"They were watching it unfold and as soon as that happened, they immediately jumped out of their chairs and ran over to the apparatus and began responding," said Pasadena Fire Department Chief Bryan Frieders.

The victim in the SUV appeared to sit still until emergency crews arrived and opened the passenger door to talk to the victim.

The Jaws of Life were brought to the scene to help get the female driver out of the SUV. There were two car seats in the vehicle but no kids inside. The victim was taken to Huntington Memorial Hospital in serious but stable condition.

The chase suspect got out of the work truck with his hands up and appeared to comply with officers as he was taken into custody. He was later spotted being treated at the crash site, with his head bandaged up. Once released from the hospital, the suspect will be turned over to police in Bell Gardens, where the pursuit began.

It was just one of at least four chases around the L.A. area on Thursday.

In Hollywood, the driver of a Prius hit no fewer than seven cars, including several police cars. Many attempts to stop the car failed before it was finally pinned in, but not before an officer was injured.

In downtown L.A., the pursuit of a stolen SUV came to an end near Skid Row. A bystander was tased and arrested by Upland police. The female driver of the SUV was also taken into custody.

Late at night, a driver in a stolen Mercedes-Benz ran red lights in downtown L.A. The chase was called off when a man crossing the street was nearly hit. The driver escaped.

California Highway Patrol Officer Ryan Behar explained that there are a lot of factors to consider when deciding to end a police chase.