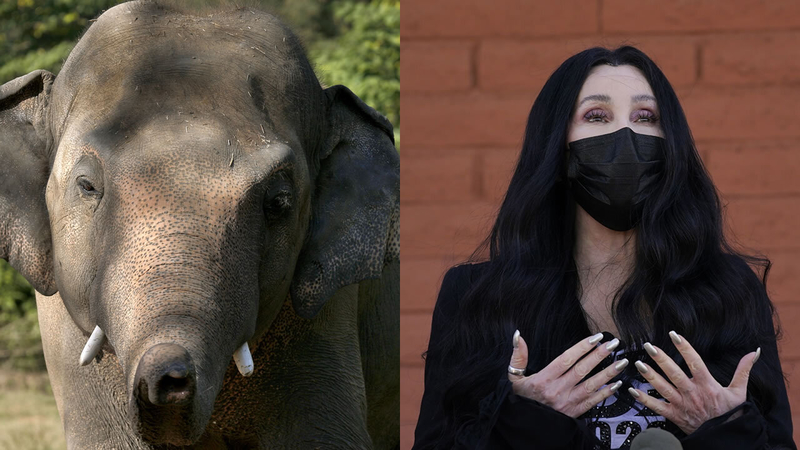 ISLAMABAD -- Pop superstar Cher is overseeing the relocation of an elephant from a zoo in Islamabad, Pakistan for better conditions at a sanctuary in Cambodia. Cher, along with animal rights groups, long fought for the transfer of Kaavan, known as the "world's loneliest elephant."

The elephant has languished in the zoo for 35 years, most of those years in chains. Kaavan lost his partner in 2012. Dr. Amir Khalil, a veterinarian with animal welfare group Four Paws International says Kaavan was heartbroken after she died.

Activists dubbed Kaavan the "world's loneliest elephant" after his plight gained international attention and the unhappy elephant was diagnosed as emotionally and physically damaged.

When a man in Thailand pretended to drown, a baby elephant jumped to the rescue.

Kaavan has been diagnosed by veterinarians as both overweight and malnourished and also suffers behavioral issues due to his isolation. Khalil says he has treated the elephant for several wounds and ailments over the past three months. The elephant also developed behaviors including shaking his head back and forth for hours, which wildlife veterinarians blame on annoyance and boredom.

Kaavan was placed on a healthier diet and veterinarians have worked on calming his nerves in preparation for his trip. He is expected to arrive at his new home on Monday afternoon. Four Paws says there are several elephants at the sanctuary, including three female elephants, that are awaiting his arrival.

Cher traveled to meet Kaavan in Pakistan on Friday to oversee his journey from captivity to freedom. She took up Kaavan's cause four years ago and has been a loud voice advocating for his resettlement. She is paying half the cost for Kaavan's journey.

Cher tweeted that she is making a documentary about Kaavan's plight and says she thinks it will be "heartwarming."