After hitting the power lines, the bird caught fire, fell to the ground and ignited dry grass, Chino Valley Fire posted on Twitter.

The tweet went on to state that fire officials and SoCal Edison reps inspected the power pole and concluded that there was not a transformer installed on the power pole or involved in the fire as they initially reported.

As of Monday, the fire had burned 156 acres and damaged at least one home in Chino Hills.

Firefighters appeared to be making headway battling the flames, with forward progress stopped and containment listed at 80% by the evening.

No evacuations were ordered and no injuries were reported. Dry, hot conditions contributed to the spread Sunday afternoon as temperatures climbed into the 90s and a light breeze fanned the flames.

The flames came dangerously close to a number of homes, and one house on Miramonte Court sustained extensive damage when flames broke out on the roof. Firefighters attacked the structure fire with water and were able to keep it from spreading to other homes. 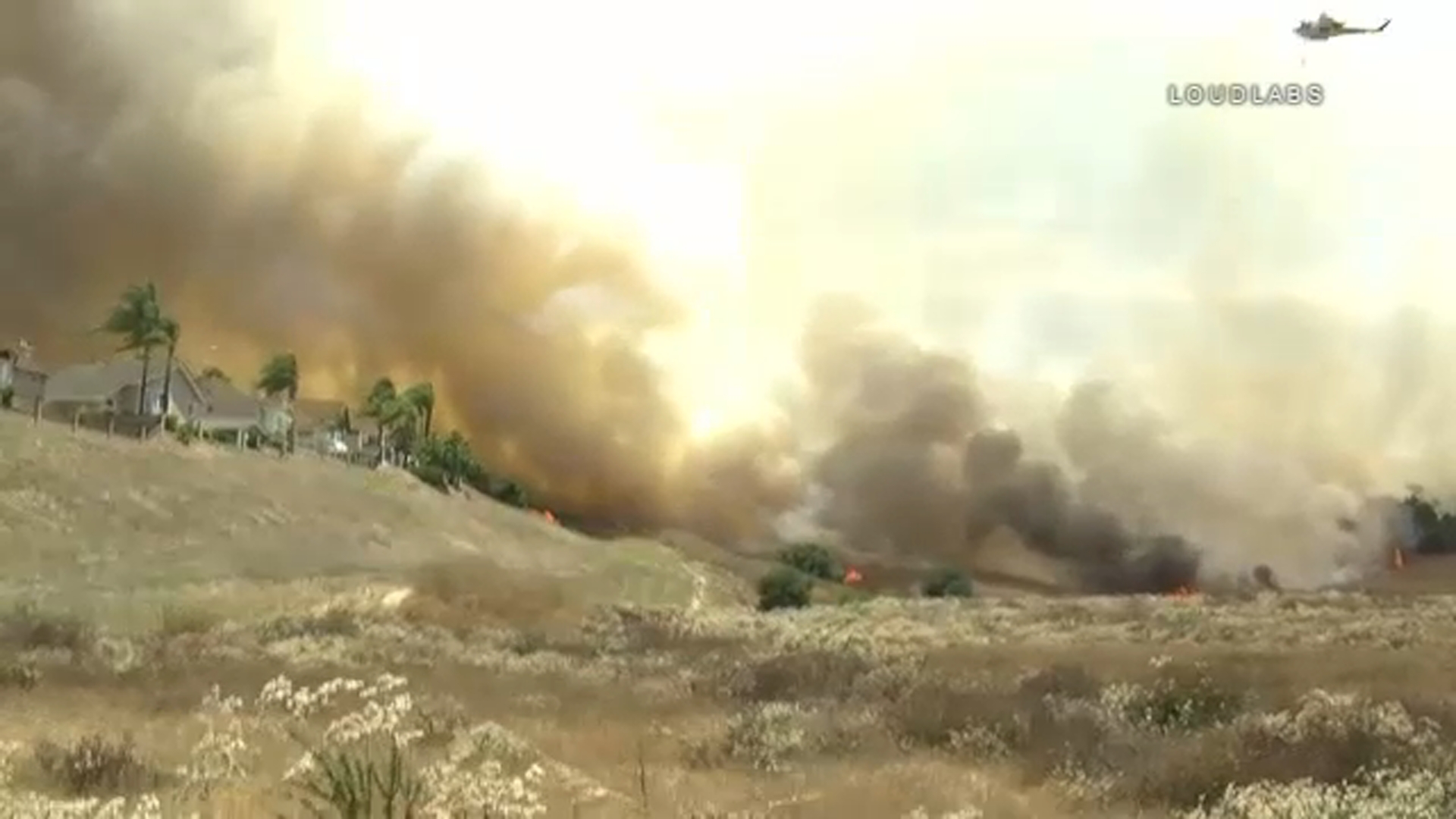 "We have no clothes, we have no shoes," Forrest said. "It's hard to look at your home and your life's legacy gone up in flames, but maybe there will be an opportunity to rebuild it."

By the time firefighters arrived, the home was already engulfed in flames. And to make matters worse, when they got there and hooked up to fire hydrants, there was a momentary drop in water pressure.

Massiel De Guevara of the Chino Valley Fire District says it turns out, it was because so many neighbors were using garden hoses to water down their properties.

"Any time you have an incident like this where you have a lot of resources tapping into the same water source, and we have multiple residents using their garden hose to water down their property, there's going to be a loss in pressure, and that's not just in this incident, it's across the board," De Guevara said.

And because of where Miramonte Court is -- it's at the top of a hill -- the city estimates water pressure is already only about 60% of normal. Could a lack of adequate water pressure been a reason why firefighters couldn't save this home?

"Maybe there was a water pressure problem because there was so much of it going on," said neighbor Sylvia Balich.

Balich says the fire was moving so quickly - who knows if it would have made a difference?

"I didn't think it would touch the house, and all of a sudden it did, it was like fast," Balich said.

The vegetation fire - named the Star Fire - began near Chino Hills Parkway and Falling Star Lane just before 2 p.m., according to the Chino Valley Independent Fire Department.
Chino Valley Fire crews were working to contain the blaze and urged people to avoid the area.