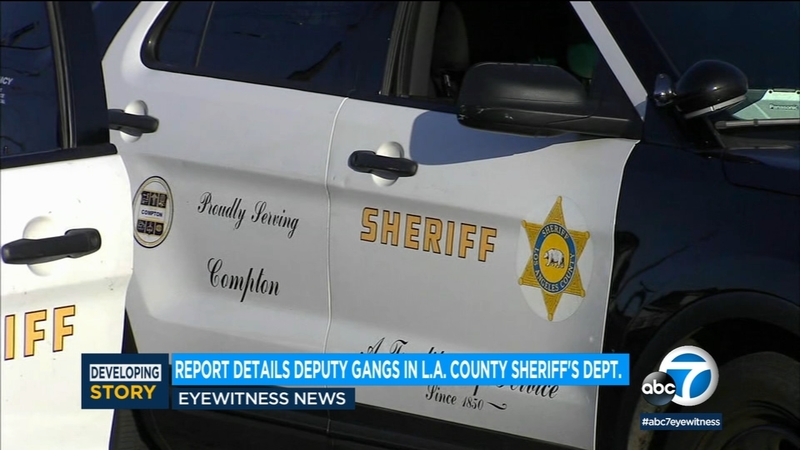 LOS ANGELES (CNS) -- In an extensive report released Tuesday analyzing more than a dozen secret subgroups at the Los Angeles County Sheriff's Department, researchers at Loyola Marymount University Loyola laid out claims of "violent'' gangs of deputies, where members encouraged an aggressive style of policing, engaged in misconduct and were sometimes marked by common tattoos.

In the report, published by the school's Center For Juvenile Law & Policy, chief author Sean Kennedy claimed the groups, "foster a culture of violence and escalate uses of force against community members.''

The report laid out recommendations for the department, which it said had a "longstanding, broad institutional problem in need of serious reforms.''

"Inking parties" are a secret ritual to initiate deputies into the alleged "Executioners" gang in the Los Angeles County Sheriff's Department, according to a sworn deposition testimony by LASD Deputy Art Gonzalez.

The report's authors, which include attorneys and students at the school who said they sourced information from internal affairs interviews of deputies, internal memos and other sources, describe groups of deputies encouraged to use force on people -- at times, other deputies -- and being congratulated for doing so.

Tallying shootings by Los Angeles County deputies over the past five years, the report found more than half had taken place at sheriff's stations where "an active deputy gang'' is present.

"While further information and study is needed, canvassing what is known about the deputy shootings during the immediate past five years demonstrates at least a correlation between being involved in a deputy shooting and working out of a LASD station with an active deputy gang,'' the report states.

In a statement, sheriff's Lt. John Satterfield said the agency was "aware of the non-peer reviewed report containing non-academically acceptable citations and unproven allegations as a primary basis for content'' and that it would "examine the report and extrapolate everything which may be helpful towards positive organizational change.''

"As a progressive and a reformer, Sheriff Alex Villanueva was the first and only Los Angeles County sheriff to ever successfully implement a policy banning the formation and participation in cliques and sub-groups.''

Of the 18 secret subgroups profiled in the report, it described 11 as "gangs,'' where members typically shared a common tattoo and engaged in misconduct that went unchecked, some performing "rituals'' which "create a culture of celebrating the use of lethal force in the line of duty. ''

The report cited one deputy who claimed in a recent deposition a group called the Executioners celebrated at bars after a deputy would shoot someone, and that the deputy would then receive the group's common tattoo: a skull wearing a Nazi-style helmet and holding a rifle while surrounded by flames.

A deputy with the L.A. County Sheriff's Department says he endured five years of "bullying and intimidation" by members of a gang of deputies at the Compton sheriff's station known as the "Executioners."

Deputies who wanted to join would "start 'chasing ink' by becoming very aggressive on the streets in order to show the Executioners that they are 'worthy' of wearing their tattoo,'' the deputy stated, according to the report.

Another "gang'' called the Posse, which was based inside the mental health ward of the Los Angeles Twin Towers Correctional Facility, "resisted reforms aimed at treating inmates with severe mental illness more like patients,'' the report claims.

According to the Los Angeles Times, the county has paid out roughly $55 million in settlements in cases in which deputies were alleged to belong to a secret society.

Over the years, a succession of sheriffs has failed to bring the subgroups under control despite multiple internal investigations, including a probe by the FBI.

The report by Loyola called that incident "a coordinated... attack'' by a group called the Banditos, during which four veteran deputies who were members "attacked and beat up several unaffiliated deputies.''

The report states that the deputies who were attacked said they were retaliated against afterward, finding dead rats placed outside their homes.

"Several lawsuits against the County allege that Banditos members exercise de facto control over the East Los Angeles station and that LASD management has tolerated and even tacitly approved of their misconduct,'' the report states.

After an investigating into that fight, Villanueva said 26 deputies were being sent letters of intent notifying them of possible suspension or termination.

Villanueva has also said that immediately after he took office, he relieved the East Los Angeles Station captain of his command and overhauled the command structure at the station.

A report on the group by Inspector General Max Huntsman stated that four deputies were relieved on duty as a result of the fight, but it alleged that internal investigators ignored evidence and neglected to ask tough questions of witnesses to the alleged assault that might have led to criminal charges.

While the report by Loyola noted that "problematic subgroups'' are not unique to the sheriff's department, the researchers "could not find any other law enforcement organization in the United States with so many subgroups engaging in gang-like behaviors over such a long period.''

The result of LASD groups that glorify "shootings and other uses of force against community members'' is that they "undermine the sanctity of human life and deny the dignity and respect owed to all people,'' the report states.

The long-time presence of "deputy gangs,'' impact the "fairness of criminal and civil proceedings'' and violate civil rights laws, the report states.

Though the authors assert that LASD has "has staunchly refused to address the problem and, more generally, resisted transparency, oversight, and collaboration with community partners,'' the report urges the department to adopt reform measures that promote transparency, "meaningful engagement with oversight bodies, collaboration with community-based organizations, and true accountability for deputy misconduct.''

Included in the list of recommendations is an insistence to require all deputies to periodically disclose their tattoos, as well as have the sheriff "acknowledge the existence of all known deputy gangs and cliques and disclose all internal documents.''