Compton amputee, 10, has endured 5 surgeries since neighbor handed him a lit firework: 'I want to tie my shoes' 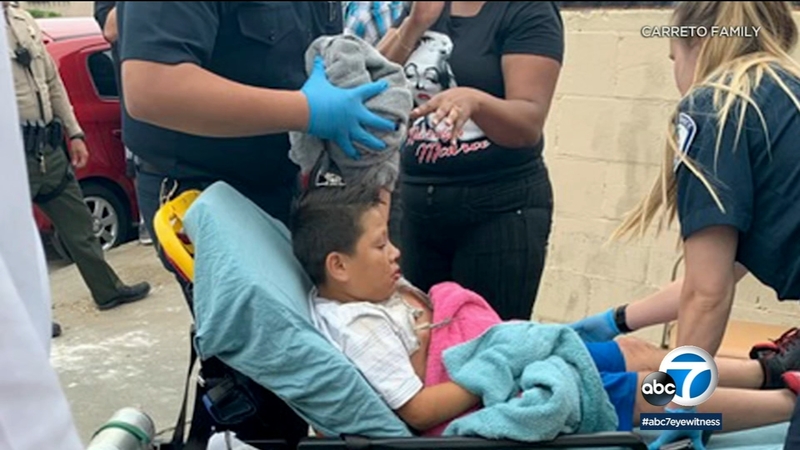 Says child amputee who was injured by fireworks: 'I want to tie my shoes'

COMPTON, Calif. (KABC) -- Fireworks might be fun for a moment, but the cost of mishandling them can last a lifetime.

Aaron Carreto of Compton turned 10 years old on the day that he watched neighborhood men fiddling with a small object.

The next thing Aaron knew, the sizzling device was tossed into his hands and it exploded with enough shock to set off car alarms.

"They gave me the firework, lit up. I want them to be in jail so they don't do this to other kids," said Aaron, crying in a hospital.

It has been a year and five surgeries since it happened.

Caring for Aaron Carreto's wounds after he was handed a homemade firework by his neighbor has become an around-the-clock job for his family.

Aaron lost fingers on his right hand and there is a stub where his left hand should be.

One of the neighbors responsible, 28-year old Walter Revolorio, is serving a term at Wasco State Prison.

Aaron's crippling injury is a life sentence. But he is facing his future with courage.

Manipulating the controls for video games is his therapy for his hands, and for the trauma he hits the soccer field.

Aaron's coach, Juan Resendiz, said that after five surgeries he gave Aaron the option of doing sit-ups instead of push-ups.

Aaron will need that bravery to fight the flashbacks that his family fears will return.

"He would cry when he would hear fireworks," said the boy's sister Alison.

The family's hope now is for enough money in a GoFundMe account to pay for for a major surgery that will give Aaron mechanical fingers.

Aaron's dream is to hold a soccer ball and dress himself.

The calamity has changed the course of the Carreto family.