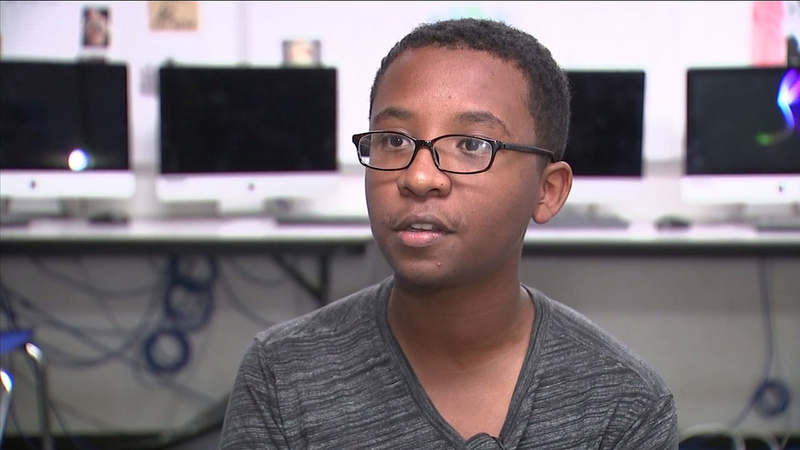 SANTA MONICA, Calif. (KABC) -- Mihret Melaku isn't old enough to vote, but the sophomore at New Roads School in Santa Monica said the last two years of political conflict in the U.S. have been a wake-up call for his young generation.

"People have entered these really hostile arguments, and sometimes I see people that are even friends just not speaking to each other just because of their political beliefs and their political views," Melaku said.

That's why the 15-year-old co-founded the Civil Discourse Club on campus in September, and it's already grown to 30 members. The hope is to decrease polarization and increase discussion nationwide.

"In order to be able to highlight the importance, the necessity of us to be able to recognize the person behind the opinion, being able to empathize with the other side's arguments and perspectives, I decided it would be important to open a club," said Melaku. "I want to be as politically active as possible. I think it's my democratic obligation as a citizen of this country to try and promote as much political education, as much conflict resolution, and as much dialogue as possible."

"They give me hope," said Head of New Roads School, Luthern Williams, regarding Melaku and the other students in the Civil Discourse Club. "I think they have seen a world where they largely feel adults have failed them, and failed to be able to find common ground that's necessary for the country to continue to thrive."

Melaku is also a classically trained pianist. The ABC7 Cool Kid says he hasn't chosen a career path just yet, but he does see parallels between music and politics.

"Music is always something that you can never be able to know absolutely," Melaku said. "There's no piece that can be fully mastered, and there's always a place to learn from. So, I never dismiss something as inferior or ignorant, because there's also a beauty of knowledge in every single thing, and that's why I've learned to value all of the political opinions."
Report a correction or typo
Related topics:
educationsanta monicalos angeles countyhigh schoolmusiccool kidspolitics
Copyright © 2021 KABC Television, LLC. All rights reserved.
COOL KIDS
Meet the 11-month-old who learned to snowboard before she could walk
Jersey City kids find their rhythm through bucket-drumming class
Learn how to bust a move on roller skates
Chicago indoor skate park teaches confidence to kids
TOP STORIES
Mom with baby in stroller robbed in driveway of Hancock Park home
Suspicious item at facility near LAX cleared
Whittier family mourns teen son killed by alleged drunk driver
Could LA law enforcement agencies lose officers to vaccine mandates?
Authorities: Student kills 3, wounds 8 at Michigan school
Lancaster: Father arrested in children's deaths charged with murder
Man who bought Lamborghini with $1.6M PPP loan gets 9 years in prison
Show More
Chris Cuomo suspended from CNN after AG releases documents
Actors honored for rescuing 14-year-old trapped under SUV in NYC
17-year-old from Compton who was missing for a week found safe
San Bernardino father, 6 kids surprised with Christmas toys
'El Chapo' Guzman's wife sentenced to US prison
More TOP STORIES News