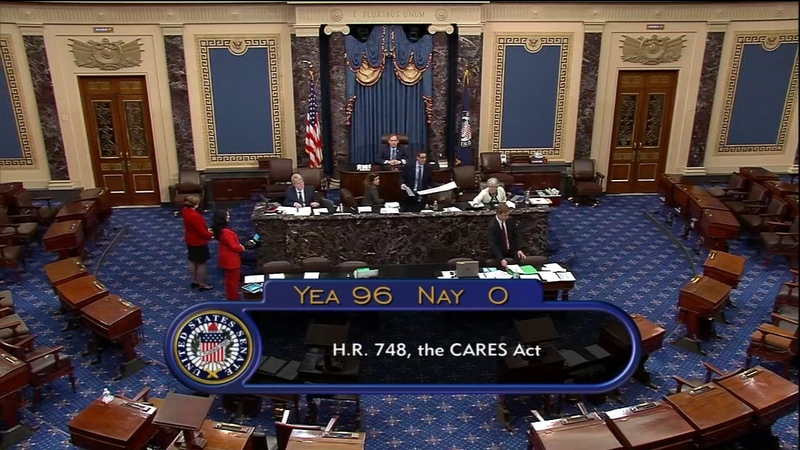 The Senate unanimously voted on the stimulus bill that will help Americans as efforts to slow the spread of the virus are choking the economy. The $2 trillion coronavirus relief package is the biggest in American history.

Here is a breakdown of who gets money and how much:

As income rises, the payment would scale down. It phases out entirely at $99,000 for singles and $198,000 for couples without children. This means 99% of Americans would receive some sort of funding, ABC News reports.

Furloughed workers would get whatever amount a state usually provides for unemployment, plus a $600 per week add-on, with gig workers like Uber drivers covered for the first time.

In total, unemployed workers are eligible to receive up to 39 weeks of unemployment benefits.

The bill covers a $367 billion program for small businesses affected by the crisis. The loans would be available during an emergency period through June.

The bill allocates $500 billion for guaranteed, subsidized loans for larger industries, including a fight over how generous to be with the airlines. Hospitals would get significant help as well.

This includes an "employee retention" tax credit that's estimated to provide $50 billion to companies that retain employees on payroll and cover 50% of workers' paychecks. Companies would also be able to defer payment of the 6.2% Social Security payroll tax.

Schumer said businesses controlled by members of Congress and top administration officials - including Trump and his immediate family members - would be ineligible for the bill's business assistance.

Here's a full list of highlights from the Associated Press:

- Loans and guarantees to businesses, state and local governments: $500 billion. Includes up to $50 billion for passenger airlines, $8 billion for cargo carriers, $17 billion for "businesses critical to maintaining national security." Companies accepting loans may not repurchase outstanding stock; must maintain their employment levels as of March 13, 2020 "to the extent practicable"; and bar raises for two years to executives earning over $425,000 annually.

- Small businesses: Includes $350 billion. For companies with 500 employees or fewer, loans that may be forgiven if company retains workers; $17 billion to help small businesses repay existing loans; $10 billion for grants up to $10,000 for small businesses to pay operating costs.

- Education: $31 billion. Includes $13.5 billion for states to distribute to local schools and programs, $14 billion to help universities and colleges.

- Diplomacy: $1.1 billion, including $324 million to evacuate Americans and diplomats overseas; $350 million to help refugees; $258 million in international disaster aid; $88 million for the Peace Corps to evacuate its volunteers abroad.

- Arts: $150 million for federal grants to state and local arts and humanities programs; $75 million for Corporation for Public Broadcasting; $25 million for Washington, D.C., Kennedy Center for the Performing Arts.