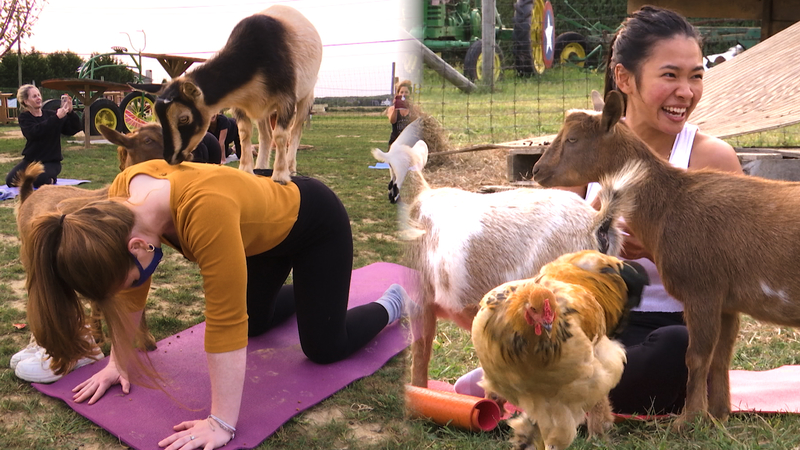 WATER MILL, New York -- Downward dog, child's pose, and the cobra pose are commonly known movements when practicing yoga. However, these moves might be a little different when you attend a goat yoga class at the Corwith Farmstand on the East End of Long Island.

With goats climbing on your back and nibbling at your shirt, it may not be your most peaceful class, but it will be entertaining!

As soon as you pull up to the farm, you can see all of the goats start to perk up while they wait for your arrival. The goats come in all shades of colors and are very friendly, especially if you have food.

The idea to offer goat yoga started when the current owner of the Corwith Farmstand, Ryan Corwith, and his manager, Gina Geness, saved a blind baby goat from a slaughterhouse in Pennsylvania.

"We Kept working with her, it took me three to four days to get her to feed, she was so weak we weren't sure if she was going to make it," said Geness. "Finally she took to the bottle, and I kept giving her medication for her eyes and about three weeks to a month in she was able to see again. Now she's like the mascot of the farm."

That was Corwith's and Geness's first goat, and they decided to name her "Hope". After seeing how much fun it was having a goat, they added 16 more to the farm.

Visitors to the farm stand loved the goats so much that Geness decided to look into a way where customers can have more hands-on experience with them, that's when she discovered goat yoga.

They found an instructor who adjusted to the goats being around her and decided to started to offer a few classes a week in the Spring.

The classes are currently being held outside to offer a socially distant option, where participants can have plenty of space with limited spots for people to sign up.

The goat yoga classes have become one of their most popular attractions on the farm.

Related: 103-year-old family farm perseveres through a century of challenges

"So I was a yogi before quarantine and I haven't taken a class since," said Iwona Rokosz, a yoga class participant. "This by far was my favorite yoga class ever."

In addition to goat yoga, the farm stand hosts special events in the fall which includes a pumpkin patch, a "Stranger Things" themed corn maze, and socially distant hayrides.

Corwith is proud to be a fifth-generation farmer and is excited to keep innovating and collaborating with Geness to keep the farmstand a go-to spot for the Long Island community and its visitors.