The thieves have stolen thousands of dollars' worth of equipment, according to store owners.
KABC
By Sid Garcia 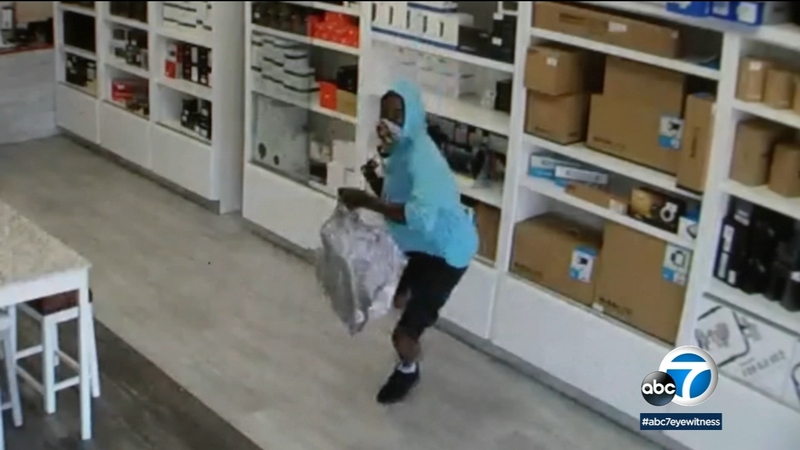 Camera stores across Southland being targeted by thieves

CORONA, Calif. (KABC) -- Several camera stores in Southern California have been robbed by the same two thieves who reportedly grab expensive cameras and other equipment and run out.

In one recent incident, surveillance video from Mac Star Cameras & Electronics in Corona shows one of the suspects walking in, grabbing a couple of cameras and bolting out.

The same suspects allegedly robbed the store's other location in Anaheim.

When the suspects came into the Corona location Saturday, the employees recognized them and did not pull any cameras out of their boxes to show them. The suspects left.

"One of them came back, fully covered with a mask and a hoodie, and then took a few items off the shelf," said Melissa Delgado, who manages Mac Star Cameras & Electronics.

Delgado said other camera store managers in the Inland Empire, Orange and Los Angeles counties have been emailing one another with warnings that these suspects are stealing from camera shops.

Corona police along with other departments are investigating.

Like other electronics, there is a shortage of inventory.

The thieves have stolen thousands of dollars' worth of equipment. The camera store managers are reminding each other to share the images of the thieves and to be more aware of who is coming in and out of their stores.

Delgado said they were not violent and appeared to know what they were doing.

Meanwhile, a Pasadena camera shop was hit in a similar way, and an employee was injured.

The information the camera stores have been sharing includes how to protect their inventory. They will store the high-end equipment in a secure spot and only put the boxes on display.

If the thieves return, all they will get is an empty box.

Anyone with information on any of these incidents is urged to contact authorities.