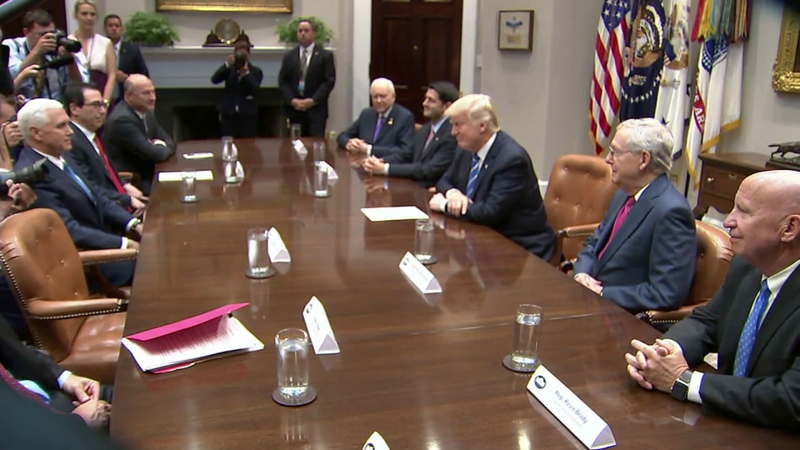 Attorney General Jeff Sessions made the announcement at a briefing at the Department of Justice Tuesday morning.

Attorney General Jeff Sessions on Tuesday makes the announcement that the DACA program is being rescinded.

The administration will consider no more new applications for legal status dated after Tuesday. If you are not already in the program, you are out of luck. Applications filed before Tuesday that are pending will continue to be processed.

Anyone who has a DACA permit expiring between now and March 5, 2018 can apply for a two-year renewal. That application must be submitted by Oct. 5, ABC News learned.

But the administration is giving Congress six months to come up with a legislative fix before the government stops renewing permits for people already covered by the program.

Former President Barack Obama, who implemented DACA on June 15, 2012, using an executive action, issued a statement in response to the decision, calling it "cruel' and "self-defeating"

"This is about young people who grew up in America - kids who study in our schools, young adults who are starting careers, patriots who pledge allegiance to our flag. These Dreamers are Americans in their hearts, in their minds, in every single way but one: on paper," the statement read in part.

In a statement issued shortly after the announcement, Trump defended his decision to phase out the program, saying he is giving Congress a "window of opportunity" to act.

He stressed he is "not going to just cut DACA off, but rather provide a window of opportunity for Congress to finally act."

In statement, Trump defends his decision to phase out DACA program https://t.co/LkX4uutI5n pic.twitter.com/3v5kW7RPH3

Trump added that he is not in favor of punishing children for the actions of their parents but said, "Young Americans have dreams too."

Earlier in the day, President Donald Trump said in a tweet he's putting the fates of "Dreamers" into Congress hands.
"Congress, get ready to do your job - DACA!" he said on Twitter.

Congress, get ready to do your job - DACA!

"Make no mistake, we are going to put the interest of AMERICAN CITIZENS FIRST!" Trump added in a second, retweeted message. "The forgotten men & women will no longer be forgotten."

DACA protects nearly 800,000 people from deportation. It allows individuals who entered the U.S. prior to their 16th birthday to register to remain in the country, provided they pay a fee and meet certain requirements related to their education and criminal record.

The administration chose Sept. 5 to make its announcement on DACA, the same day Texas Attorney General Ken Paxton and nine other attorneys general have said they plan on expanding a lawsuit to include a challenge to the DACA program if it's not ended.

Obama intended for the program to be temporary and for Congress to pass a more comprehensive immigration reform bill.

Congress has been struggling for years to pass legislation that would overhaul the country's immigration system, with the most recent attempt in 2013. The immigration bill drafted by eight Republican and Democratic senators -- known as the "Gang of Eight" -- that would have given millions of undocumented immigrants a path to citizenship passed the Senate but failed in the House.

Trump's decision comes after a long and notably public deliberation. Despite campaigning as an immigration hard-liner, he has said he is sympathetic to the plight of the immigrants who came to the U.S. illegally as children and in some cases have no memories of the countries they were born in.

The White House had said repeatedly that the decision was one Trump was not taking lightly.

Trump told ABC News' David Muir in January that those covered by the program "shouldn't be very worried" and that they're "going to take care of everybody."

"I do have a big heart," said Trump at the time on the matter.

A rally to "Defend Daca" was held at noon at the Kenneth Hahn Hall of Administration in Los Angeles.