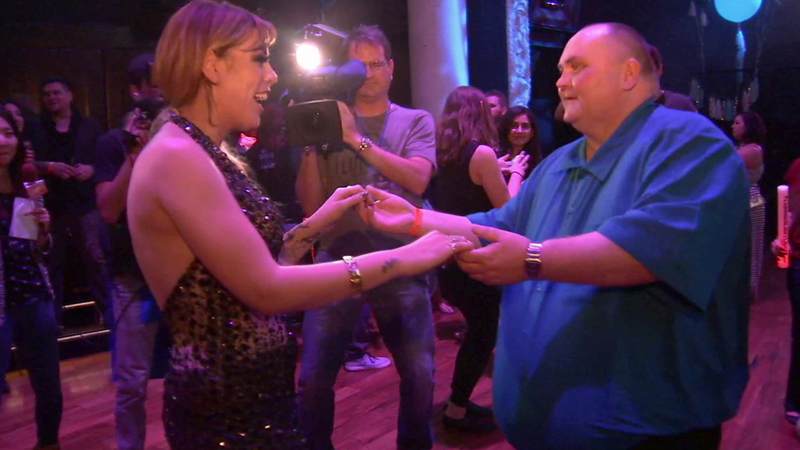 HOLLYWOOD, LOS ANGELES (KABC) -- Surrounded by a sea of supporters, Sean O'Brien, who gained worldwide fame as "Dancing Man," busted a move, celebrating in a room full of positive vibes.

"This is a once in a lifetime opportunity that I'm going to grasp it with both hands," O'Brien said.

The massive Hollywood dance party was the brainchild of two Echo Park women who wanted to turn something negative into a positive. The London-native became a viral sensation after a cyberbully posted photos making fun of him out on the dance floor, but support for O'Brien on social media quickly took over.

After anonymous commenters made fun of one man trying to dance, a group of women is trying to organize a dance party for him.

Dance organizers launched a campaign to bring the 47-year-old to Los Angeles to dance with them and hundreds of others.

"I've been really overwhelmed by the amount of good I've seen from the world in this," dance organizer Hope Leigh said.

"This is amazing," dance organizer Cassandra Fairbanks said at the party. "It really shows power of people. If everybody comes together to do something nice look what you can accomplish."

Celebrities including Pharrell and Moby performed for the crowd, joining the fight against cyberbullying and body shaming. Monica Lewinsky also joined the push for acceptance.

Those who hit the dance floor said size shouldn't matter.

"Anyone should be able to go out and dance and have a great time," Ontario resident Amanda Bourne said.

"It's important that people have confidence in their bodies not feel shamed for how they look," South Los Angeles resident Kahdija Murray said.

O'Brien said he just hopes his experience shows others the power of kindness.

"The positivity of it all. So many good people out there. This all started because somebody tried to be nasty and it turned good so quickly," O'Brien said.