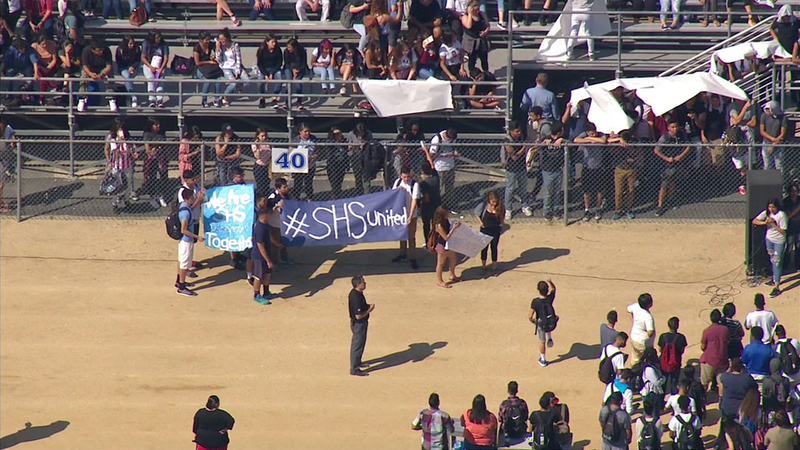 Students at Sylmar High walk out of class to protest violence

SYLMAR, LOS ANGELES (KABC) -- Hundreds of students at Sylmar High School walked out of class on Thursday morning to protest violence on campus.

Around 9:30 a.m., students walked out of class and gathered at the bleachers near the football field for more than an hour.

The walkout was another event in a string of incidents following a school fight that was caught on camera Monday.

Some students say the fight was the result of gang activity, while others said it was racially motivated. School officials say they are still working to determine the cause of the fight.

In the midst of the walkout, some parents rushed to the school to pull their children out.

"I don't know what's going on. I just got a text from my kids that they don't feel say no more, and I said you know what, I don't feel that they're safe. I don't want them here anymore," said parent Susan Galan.

Actor Danny Trejo spoke out at a meeting Wednesday night addressing the fight. Students and parents were upset that they would not be allowed to speak at the meeting, but the administrators eventually yielded the mic to them following Trejo's speech.

"Machete" actor Danny Trejo joined in on a meeting between Sylmar High School officials and outraged parents about the racially charged school fight that was caught on camera.

"You're not listening to them. They'll come up with a solution," Trejo said to applause and cheers. "I'm so fed up with this ... I'm sorry. I love you, I know all of you are doing such a great job. I know that. But you know what? You've got your heads in the sand."