As cities across the country grapple with the issue of police responding to a non-violent crisis, one Oregon city has found a way to replace police officers with crisis teams, and there's a similar program gaining traction in Southern California.
KABC 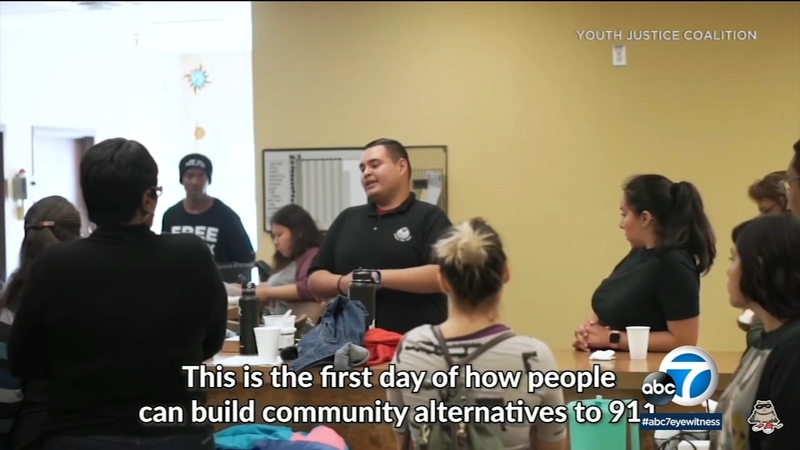 As cities across the country grapple with the issue of police responding to a non-violent crisis, one Oregon city has found a way to replace police officers with crisis teams, and there's a similar program gaining traction in Southern California.

Calls to "defund the police" mean different things to different people, but the bottom line for advocates is to have funds shifted to community-based organizations that would be better trained to respond to certain emergencies.

"People that are having, let's say a bad day, don't go to jail because they were standing on a corner yelling and screaming," said one man in Eugene, Oregon.

RELATED: What does defund the police mean for Los Angeles?

In Eugene, Oregon, one such community program that has proven to work is CAHOOTS, which stands for Crisis Assistance Helping Out on the Streets.

"They come in, calm them down and get them where they need to go," the man said.

The city-funded teams of EMT's and crisis counselors in a mobile unit respond to emergency calls instead of police officers. Many of those calls include mental health crisis incidents.

"Everything in me thinks that this model is saving lives. It is saving money. It is helping people in the community have better outcomes," said Ebony Morgan, CAHOOTS crisis counselor.

Her father was killed in a confrontation with Eugene police -- which fuels her passion for the program's mission.

"There's something really special about the way we respond with a crisis worker and a medic together in our van that can also transport," she said. "We can do basic medical and mental health assessments in the field and figure out do you need to be at the hospital? Do you need to follow up with your doctor tomorrow? Do we need to take you to a crisis center? Do you need a shelter option? And figuring all those things out in the moment can really help someone feel supported."

Even before George Floyd's death and the subsequent protests, California Assemblymember Sydney Kamlager had her eyes on programs like CAHOOTS.

"Law enforcement doesn't have to step in for every situation, and we certainly don't have to have level 10 force to solve level two problems," Kamlager said.

In January, she introduced Assembly Bill 2054, a bill that would set aside $10 million to fund local pilot programs like CAHOOTS, among them, the Youth Justice Coalition's Community Alternatives to 911, or CAT 911 for short.

"Our community is already doing this in many aspects and we're not getting funding for it," said Anthony Robles with Youth Justice Coalition.

Before the pandemic, CAT 911 was holding meetings to create community action teams, which are trained volunteers who respond to emergencies in their South Los Angeles neighborhoods, instead of police.

Robles, who told Eyewitness News that he grew up feeling harassed by law enforcement in his community, said his group incorporates transformative justice -- talking through a conflict instead of resorting to punishment.

Kamlager believes these community programs focused on de-escalation could be the solution.

"It's an opportunity for us to try something different on the state's dime so we can see how it works, and if it works, then we can scale it," Kamlager said.

In Eugene, Orgeon, where CAHOOTS has been operating for 30 years, their teams now work side-by-side with police. Both groups are grateful to have the partnership.

"The dispatchers that dispatch police, fire ambulance and us are really good at knowing which tool will be best for that scene," Morgan said.