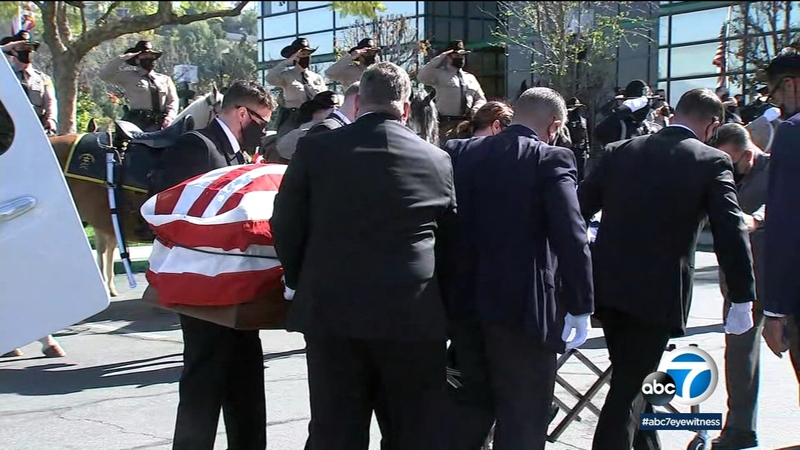 DIAMOND BAR, Calif. (KABC) -- Funeral services were held Friday for a Los Angeles County sheriff's motorcycle deputy who was killed in a violent crash while on duty.

A hearse carrying Albanese's casket was escorted by a procession to the funeral, where it was carried into Calvary Chapel Golden Springs by fellow deputies followed by a bagpipe player.

An emotional Sheriff Alex Villanueva was among those who eulogized the 41-year-old Albanese.

"It's been a tough time in law enforcement,'' Villanueva said, pausing to choke back tears. "There are people screaming at the tops of their lungs that cops are bad, and the less of us the better society is. And I say to all those -- not even close. The world is a better place because of people like Tom, because of everyone who wears this badge, wears a uniform, serves their nation, serves their community with pride, with honor."

A private burial was later held after the memorial service.

The collision that claimed the deputy's life occurred Feb. 25 while he was working an overtime shift out of the sheriff's Lakewood station. He was attempting to conduct a traffic stop near the intersection of Paramount and Del Amo boulevards when his motorcycle was struck by a Mercedes-Benz sedan.

Albanese, a seven-year veteran of the department, died at the scene. He was also a veteran of the U.S. Marine Corps who was deployed overseas four times, three of those tours in Iraq.

He is survived by his wife and two young sons, ages 7 and 11.