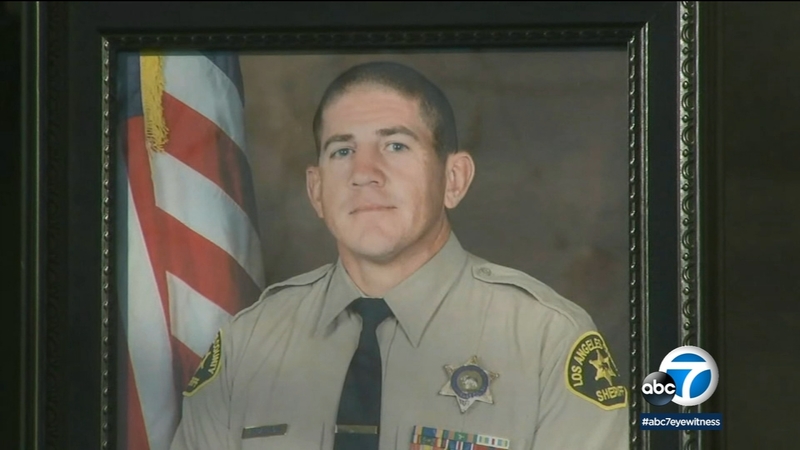 In a tweet, Villanueva said he was "saddened" to share news of the fatal crash, which occurred near Del Amo and Paramount boulevards.

Deputy Thomas J. Albanese, 41, leaves behind a wife and two sons, ages 7 and 11. He was a Marine veteran who served four tours of duty in Iraq.

A GoFundMe has been established to help the family of Deputy Albanese.

A spokesperson for the Los Angeles County Fire Department said firefighter-paramedics responded to the incident about 9 a.m. News video from AIR7 HD showed the wreckage of the deputy's motorcycle after it collided with the front end of a Mercedes-Benz sedan, scattering debris across the intersection.

Villanueva said Albanese was starting to follow another vehicle to make a traffic stop as he entered the intersection and was struck by the Mercedes.

The deputy was heading northbound on Paramount as he entered the intersection and was struck by the Mercedes heading west on Del Amo in the left turning lane intending to head southbound.

The force of the collision was "extreme," Villanueva said. "It basically threw him at a distance from the collision. And he died instantaneously on impact."

The female driver of the Mercedes, who was the only occupant of that vehicle, appeared to have a green light, Villanueva said, but investigators are still piecing together the exact sequence of events.

Villanueva said Albanese was not chasing the other vehicle but was preparing to make a traffic stop.

A eyewitness at the scene told ABC7 the other vehicle he was following appeared to be a Dodge Charger.

"I went to the car wash to grab a blanket, because people were just taking photos and videos of the body," said the witness, who gave his name only as Vince.

The deputy's body, on a center median in the street, was later covered with an American flag and a privacy canopy was set up above it.