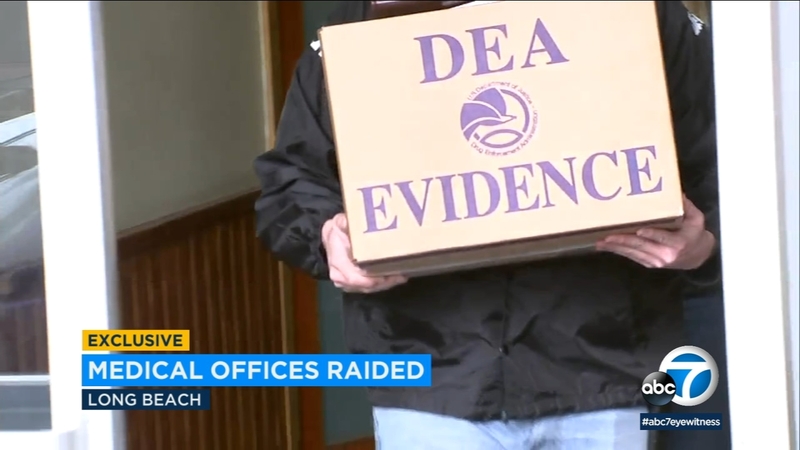 "A stern message to corrupt doctors who seek to profit from spreading addiction." said U.S Attorney Nick Hanna.
This was part of "Operation Hypocritical Oath," which targeted doctors, physician assistants, nurse practitioners and clinic operators in several states including California and Nevada. These individuals are suspected of illegally providing controlled substances to "patients" and black market customers in violation of their oaths to "do no harm."

According to a Department of Justice press release, the following nine individuals were arrested as part of this operation:

- Dr. Michael Anthony Simental, 47, of Corona, who practices at the Kaiser Permanente facility in Riverside, was arrested on charges of illegally distributing hydrocodone, an opioid found in drugs such as Vicodin.
- Gabriel Hernandez, 58, of Anaheim, a physician assistant who works at a Long Beach pain management clinic known as Vortex Wellness & Aesthetics, was arrested on Wednesday pursuant to a criminal complaint that charges him with distributing oxycodone without a legitimate medical purpose. Over a two-year period that ended in November, Hernandez prescribed nearly 6,000 controlled substances - more than half of which were for maximum-strength oxycodone, which means he was responsible for approximately 446,000 oxycodone pills being dispensed, according to court documents.
- Dr. Reza Ray Ehsan, 60, of Bel Air, was arrested on charges that allege he unlawfully sold controlled drugs to an agent posing as a patient during undercover meetings in December 2018 and January 2019. As documented in an affidavit in support of a search warrant for Ehsan's medical files, he reportedly sold more than 700,000 pills - mostly opioid painkillers - in 2015 and 2016, and he did not report the sales to the Controlled Substance Utilization Review and Evaluation System (CURES), a prescription drug monitoring program that California uses to track the distribution of prescription medication.

- Saloumeh Rahbarvafaei, 40, of Northridge, a nurse practitioner employed at several locations, including the Good Neighbor Clinic in Leimert Park, was arrested on charges of unlawfully distributing hydrocodone.
- Monica Ann Berlin, 41, of Del Mar, a former employee at a doctor's office in Beverly Hills and who is presently with a Del Mar-based company that offers perioperative care services, was arrested last Thursday pursuant to a criminal complaint charging her with distribution and possession of a controlled substance. Berlin allegedly stole a signature stamp and prescription pads belonging to the doctor who employed her, and she used them to write fraudulent prescriptions and distribute controlled substances to others.
- Ana Leblanc, 33, of Chino Hills, who worked at a Santa Ana clinic for two weeks last year, was arrested on charges of fraudulently obtaining prescription drugs.
- Dr. Robert Tinoco Perez, 57, of Westminster, is scheduled to plead guilty to a conspiracy charge in which he admits writing fraudulent prescriptions to a drug dealer, who then sold the drugs for cash and shared the profits with Perez.
- Christopher James Lazenby, 28, of Homeland, allegedly stole physicians' DEA numbers and their dates of birth, which allowed him to use the DEA's online registration system to change the addresses of eight doctors to mailboxes he had rented in South Los Angeles and Carson. Lazenby changed the address of a ninth doctor to show his medical office was a room at a Motel 6 in Inglewood, according to an affidavit filed with the criminal complaint in the case.

- Dr. Dzung Ahn Pham, 57, of Tustin, was arrested late last year on federal charges of illegally distributing narcotics by writing prescriptions for the "holy trinity" cocktail for "patients" he didn't examine. Pham has pleaded not guilty to charges contained in a six-count indictment that was returned by a federal grand jury on Jan. 16. If Pham is convicted in this case, he would face a statutory maximum sentence of 120 years in federal prison. A trial in this case is scheduled for March 12.

"Collectively the defendants are responsible for approximately 1 1/2 million opioid pills being a legally prescribed dispensed and in many cases diverted to the street for resale," said Hanna.

A total of 15 people died because of drugs related to some of these medical practitioners caught in the operation.

Officials say it's all about the money, and they seized more than $3 million in cash. They also found counterfeit drugs that often contain fentanyl.