AIR7 HD was over the scene as a group began to loot a semi-truck, with fans breaking open the doors of the vehicle's trailer and taking boxes. Others were seen on top of the trailer, and some in the crowd appeared to attempt to get inside the cab.
KABC
By Marc Cota-Robles and ABC7.com staff 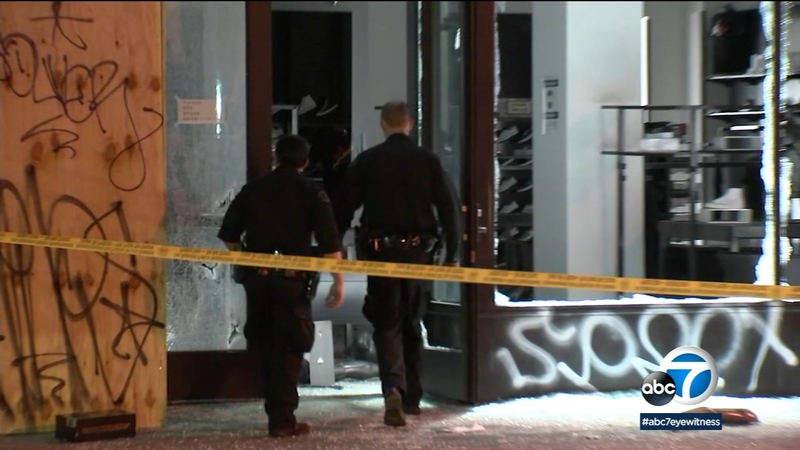 DOWNTOWN LOS ANGELES (KABC) -- Celebrations for the Dodgers' World Series win took a chaotic turn overnight in parts of Los Angeles, including in downtown where at least eight people were arrested, multiple officers were injured, a semi-truck was looted and a police vehicle and some businesses were vandalized.

Los Angeles police officers were on tactical alert in the downtown area through 2:30 a.m. Wednesday. They declared an unlawful assembly and ordered the crowd to disperse shortly before 1 a.m. in the area of Eight Street to Pico Boulevard, and Broadway to Figueroa Street.

AIR7 HD was over the scene as a group began to loot a semi-truck, with fans breaking open the doors of the vehicle's trailer and taking boxes. Others were seen on top of the trailer, and some in the crowd appeared to attempt to get inside the cab.

Officers were in riot gear on Tuesday as they responded to fans celebrating the the Dodgers' first World Series championship since 1988. Officers, some on horseback, proceeded through downtown streets, firing non-lethal rounds to disperse a crowd in the area of Eighth and Flower streets.

Fireworks were being fired off in the area of Eighth Street and Grand Avenue and a bonfire was ignited near Flower and Ninth streets, where glass bottles were thrown at officers.

At least four businesses were vandalized, including a Footlocker on Broadway, a COS store on 8th Street, a Jersey Mike's Subs restaurant on Hope Street and Walgreens on 7th Street.

Surveillance video obtained by Eyewitness News appears to show a man using a traffic cone to smash windows at the Jersey Mike's. Other vandals and thieves, including a man wrapped in a Dodgers blanket, broke into the fast-food restaurant.

One LAPD vehicle was seen covered in graffiti and its back window was shattered.

Police said eight people were arrested. Details on charges for those taken into custody were not immediately released. ABC7 captured video of two men being detained near the Footlocker on Broadway around 4 a.m. Wednesday.

At one point, LAPD officers surrounded the Footlocker, which had its windows smashed, as authorities believed the suspects were on the roof of the building.

Jonathan Zhu owns Milkcow Cafe, the ice cream shop next door to the vandalized Jersey Mike's, and said the mess he was left with is all too familiar.

"The first time was with Laker games -- again. I don't even know when it's going to stop," he said. "I really don't get it. What's the point? We're winning, we should be happy. I don't know why they're doing all these kinds of things."

In East L.A. and in Pacoima, intersections were taken over by fans setting off fireworks and cars were seen performing donuts and burnouts.

A stretch of Whittier Boulevard in East L.A. was completely blocked by celebrations until about 11:10 p.m., when L.A. County sheriff's deputies moved in and issued an order to disperse. Fans in vehicles in downtown L.A. and Pacoima did doughnuts, causing smoke from the tires to fill the streets.

There was also a celebration outside Dodger Stadium while fireworks erupted in Echo Park near the stadium.

Crowds in the street could be heard screaming and cheering as cars honked their horns. Dozens of people were on sidewalks celebrating at the intersection of Sunset Boulevard and Logan Street.

Streets around Dodger Stadium were closed to traffic, with police assisting drivers getting out of the area after the game, according to LAPD.

There were no immediate reports of damage or arrests at that location.

"As we celebrate this incredible @Dodgers victory tonight, we need to remember that COVID-19 is still here and still dangerous,'' Garcetti tweeted. "Please don't host or attend victory parties, or gather in large groups to celebrate. Let's keep L.A. safe.''

In a video posted by the LAPD's Twitter account, Scully said, "I know you want to celebrate like everybody else, but let's do it properly, let's do it the way the Dodgers did, with pride in themselves and pride in our great city. Let's show the rest of the country that we know how to celebrate the proper way.''

Moore tweeted his congratulations to the Dodgers for "a hard-fought #WorldSeries victory,'' then added, Now let's all make them proud by celebrating with class and style.''