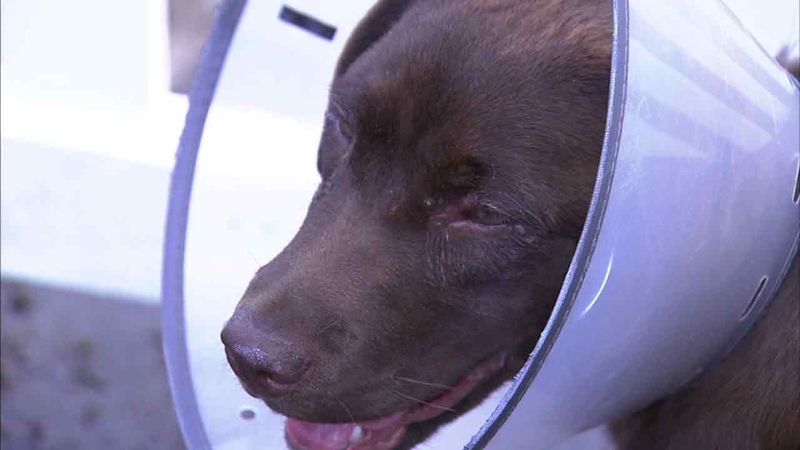 LA HABRA, Calif. (KABC) -- A family's dog in La Habra was recovering after being stung about 150 times by a swarm of bees before she could be rescued.

The story was sent to Eyewitness News using #abc7eyewitness.

Ellie is bouncing back from the attack that sent her to an emergency animal hospital. The chocolate lab puppy was in the backyard of her home Friday and could not escape a swarm of bees.

"My neighbor came over and basically informed us that our dog was getting attacked by bees in our backyard, so my first reaction was to go back there and save her," said Chad Portugal, the dog's handler.

He said the bees were surrounding Ellie as she was running, trying to get them away from her. Portugal and his friend tried to rescue Ellie, but they said some of the bees chased after them, too.

"Me and him, both, put on these big polo jackets, and we went out there, and there were just too many," said friend Zackery Martinez. "There was a swarm around the gate when we were trying to open it, so we had to actually run from the bees."

Martinez was stung three times, while Ellie was stung several times around her eyes.

The vet removed a total of 155 stingers from Ellie, and the vet bill amounted to about $2,000.

Her owners believe the bees came from a neighbor who has bee hives in the backyard that are managed by a beekeeper.

"We asked for the bees to be removed because we don't know when it's going to happen again," said dog owner Michael Schiotis. "We just want to know we're safe in our backyard, so as of now, they have been removed."