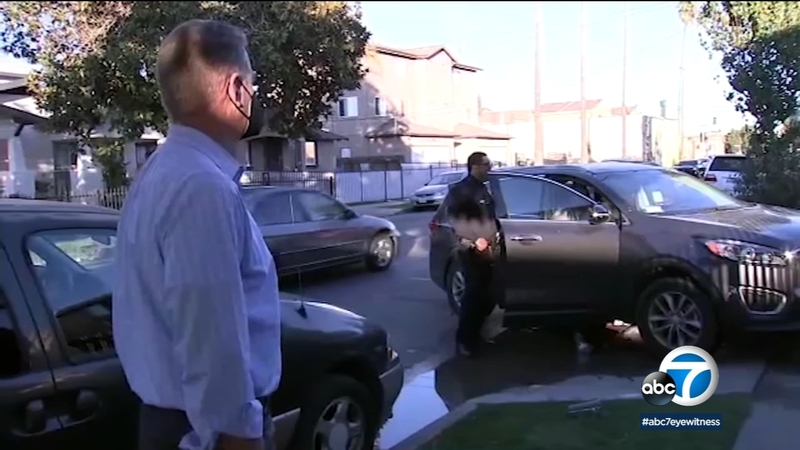 LOS ANGELES (KABC) -- In the city of Los Angeles, police officers respond to, on average, over 40,000 domestic violence calls per year - more than 100 every day.

Each of the LAPD's 21 geographic areas deploys a Domestic Abuse Response Team in the hope that early intervention can, among other things, reduce the likelihood of future domestic violence incidents.

The DART team for LAPD's 77th Division, which serves South Los Angeles and surrounding neighborhoods, works with The Jenesse Center, a nonprofit domestic violence intervention organization, offering victim support and safety by responding to the scene of domestic violence incidents.

The DART team in each division consists of one officer and one civilian advocate working four days a week, 10 hours per day.

"Domestic violence is seven days a week, 24/7," says LAPD officer John Calzada. "So not everyone is going to get a DART officer. But they should."

An initial call to 911 results in LAPD officers arriving to secure the area, which in many cases can escalate quickly from an already tense environment. But advocates like Paul Jung are not far behind, ready to guide the victim to a wide variety of assistance, from emergency shelter to counseling or legal support.

"For somebody to call the police, there has been violence," Jung says. "That's physical violence. So when we get there, we do see the ugly."

One woman who was a victim of domestic violence told Eyewitness News the DART program helped her long after the initial incident. DART officers and advocates with the Jenesse Center helped support her in court as she applied for a restraining order a year after the initial alleged abuse.