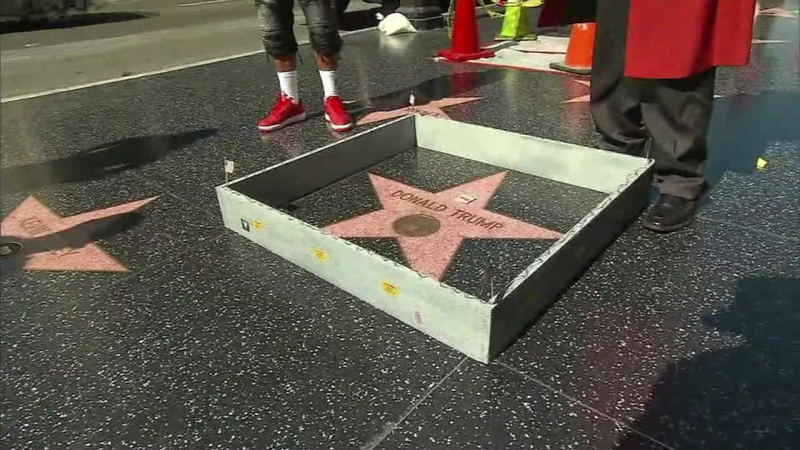 City Council members issued a resolution Monday during a meeting to ask the Hollywood Chamber of Commerce to remove the star. Later in the evening, Mayor John Duran tweeted out that the council unanimously passed the resolution.

There have been campaigns to remove stars in the past, but it hasn't happened in the Walk's 40-year history.

The star was destroyed two weeks ago by a 24-year-old man wielding a pickax. He later turned himself in. The star has also been spray painted and in October 2016, another man used a sledgehammer on it.

A vandalism suspect turned himself in after he allegedly used a pickax to destroy President Trump's star on the Hollywood Walk of Fame.

The two West Hollywood members are criticizing the president for many things including his treatment of women.

"We often take positions on issues that happen beyond our borders because we are very passionate about the values that we hold as a community and we espouse those values wherever we go," Councilwoman Lindsay Horvath said. "Using his own words, he was an assaulter, a harasser and he disrespects women at every chance he gets. That's enough for me."

The city of Los Angeles pays for the repairs each time the star is vandalized. Eyewitness News reached out to Councilman Mitch O'Farrell, who represents the district where the Hollywood Walk of Fame is located.

"Talk about the star's removal is only a distraction to the task at hand: putting all of our energies into defeating his mean-spirited and reckless agenda," he said in a statement.

Leron Gubler, president of the Hollywood Chamber of Commerce, issued a similar statement.

"People can make a difference by voting and not destroying public property," he said.

Trump was given a star in 2007 for his work as a producer on the Miss Universe pageant.