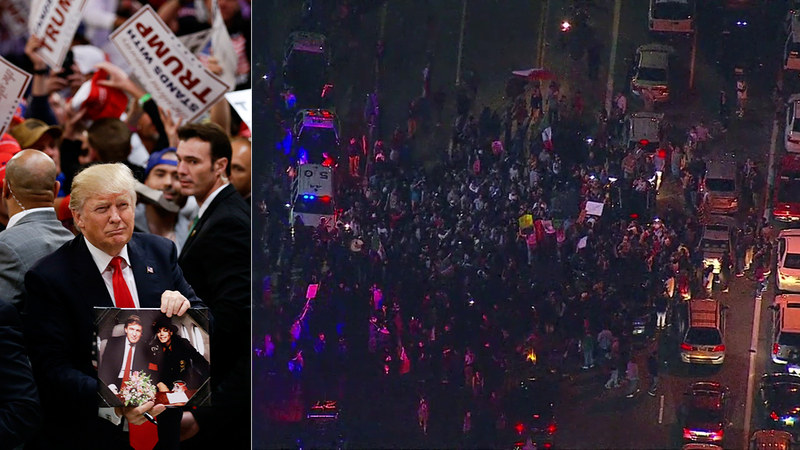 The Orange County Sheriff's Department said there were nearly 200 officers and deputies outside the Orange County Fairgrounds, as protesters mixed with Trump supporters leaving a rally held by the GOP candidate.

The protesters, many waving Mexican flags, were met with police in riot gear and others mounted on horseback. No major injuries were reported.

Some of the graffiti left behind by anti-Trump protestors in Costa Mesa. #abc7eyewitness #Trump2016 #Hillary2016 pic.twitter.com/I7Yt0r4HvY

Police issued orders for the crowd to disperse, but many remained in the street, concentrated near the intersection of Fair Drive and Fairview Drive.

A car was seen spinning wildly in the street close to the crowd, nearly striking several people before it sped off.

Protesters jumped on police cars and other vehicles, and tossed water bottles, rocks, flashlights and other objects at police officers. Some protesters even scaled traffic lights and climbed up walls.

At one point, the protesters stood their ground and formed a human chain as police officers moved in.

"Well, I don't think anybody anticipated this, but when you get a lot of people angry and you get a lot of hatred out in the world, sometimes people need to speak up," said protester Rachel Serfati of Riverside.

At least one police car was damaged by the protesters and one Trump supporter had his face bloodied in a scuffle as he tried to drive out of the arena.


The Pacific Amphitheatre was filled to its capacity of about 18,000 and many hundreds more were turned away.

It was a very different scene inside the event as the Republican front-runner spoke to a large crowd of enthusiastic supporters.

"No state in America has suffered worse from open borders than the state of California," Trump said.

He welcomed onto the stage parents whose kids were killed by individuals in the United States illegally, including Jamiel Shaw, Sr., whose son Jamiel Shaw, Jr., was killed in 2008 when he was 17.

"Donald Trump is giving us hope. All of our loved ones were murdered. We don't care about illegal aliens, we don't care. Americans first!" Shaw said.

The New York businessman in turn took back the microphone and vowed to "Build the Wall."

"These are great, unbelievable people. They did not die in vain, believe me," he said.

Donald Trump told thousands of enthusiastic supporters at a rally in Costa Mesa Thursday night that California has 'suffered' the most due to open borders than any other state in the nation.

"For the first time in the history of American politics, a man who is totally mathematically dead -- he cannot win -- has appointed a Vice President," Trump said.

"She's there shouting all night long, reading off teleprompters," he said. "I'm sort of glad she won, you know. I really want to beat her more than Sanders... If I don't win, I will consider it a total and complete waste of time, energy and money."

Many of Trump's supporters told Eyewitness News say the fact that he's not a politician is one of the main reasons why they like him.

"We trust him. We believe what he says. He's one of us," Cindy Demille of Banning said.

Thursday night's rally was held in advance of the state's June 7 primary.