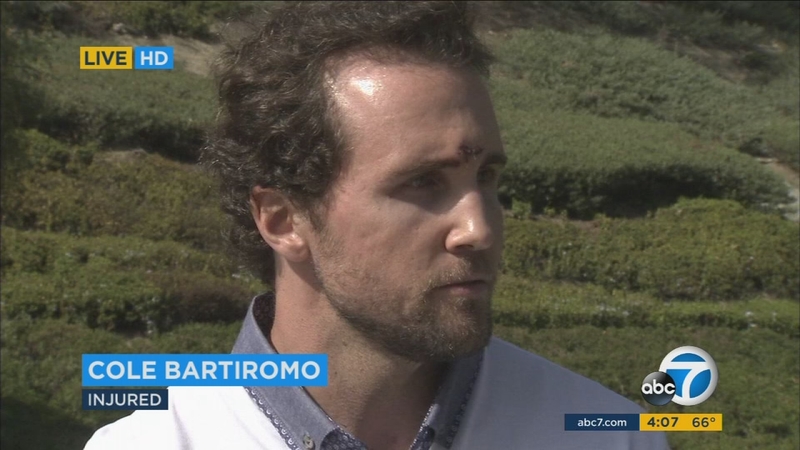 MISSION VIEJO, Calif. (KABC) -- Donald Trump supporter Cole Bartiromo was one of those caught up in the crowd violence that occurred after Thursday night's rally in Costa Mesa.

Bartiromo exited the rally wearing a red Trump "Make America Great Again" cap and was quickly surrounded by protesters who were blocking the exits to the Pacific Amphitheatre where Trump had spoken.

Bartiromo said someone from the crowd grabbed the hat, jerking his head forward. When he tried to get it back, the group closed in around him.

"I started getting punched," he said in an interview with Eyewitness News. "They were sucker punches, just blindsided. Just a thud came in. Got kicked when I went down, got cut up on the asphalt. Then I jumped up, dazed, and I knew I had to get out of there."

With a bloody face that was broadcast in news footage, Bartiromo sought medical attention. Doctors gave him six stitches to close the one-inch gash on his forehead.

The Costa Mesa Police Department said 17 people were arrested during various incidents after the Trump rally - 10 men, seven women - for failing to disperse. They were later booked at the Costa Mesa jail and released on written promises to appear.

In another incident, a Costa Mesa police officer was hit in the head with a rock, but escaped injury due to his riot helmet. Five police cars were damaged, including one with broken windows after protesters jumped on it and rocked it back and forth.

One motorist was also seen spinning his car wildly, doing donuts in the street amid the crowds, nearly striking multiple protesters before driving off at a high speed.