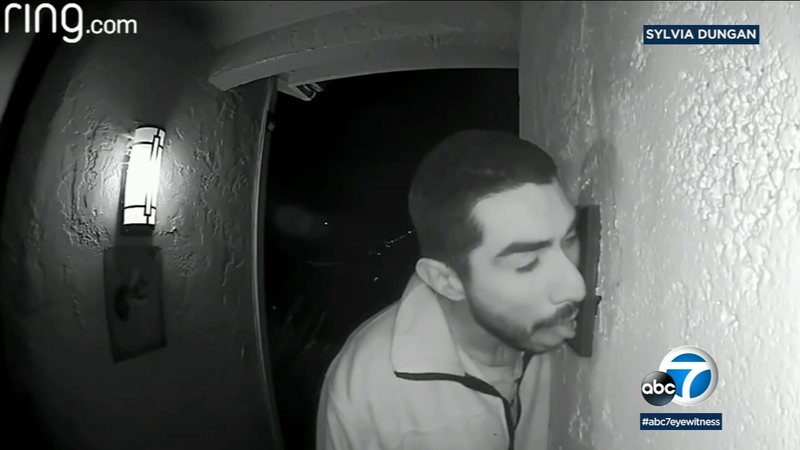 SALINAS, Calif. -- Police are trying to track down a man who spent three hours licking a doorbell at a California home.

"I thought I'd seen it all, but this takes the cake," neighbor Francisco Javier Estrada told KION.

The Dungans said they were not home at the time, but their children were inside the house sleeping.

"We were pleasantly surprised the image was so clear it didn't take us long to identify the individual," Salinas Police Department spokesperson Miguel Cabrera said.

The security cameras also caught Arroyo moving an extension cord to the front yard and relieving himself.

"You kind of laugh about it afterwards because, technically, he didn't harm anybody, he didn't break anything," homeowner Sylvia Dungan said.

As for the Dungans, they said they came home and made sure to clean off their doorbell.
Report a correction or typo
Related topics:
californiasurveillancesurveillance cameracaught on cameragrosssurveillance video
TOP STORIES
Police investigating smash-and-grab robbery at OC jewelry store
Neighbor says he heard over 100 shots fired during 'ambushed' party
Wild Wall Street: Up-and-down day reflects market uncertainty
CA students must get COVID-19 vaccine under new proposed bill
Rams ban ticket sales to 49ers fans in Bay area
Koreatown service dog is dead after being attacked by two pit bulls
Tax changes you should know about before filing this year
Show More
Cause of death revealed for 23-year-old woman found dead after date
Dad charged and fired from job after racist tirade posted on TikTok
Woman killed in 'targeted ambush' at her birthday party in Inglewood
5 tax changes that can boost your refund this year
New Tupac Shakur exhibit in DTLA sheds new light on rapper's life
More TOP STORIES News