More than $100,000 worth of jewelry stolen after robbers held 3 people at gunpoint at hotel in DTLA

According to police, two suspects got out of their car and robbed the victims near the valet area.
KABC 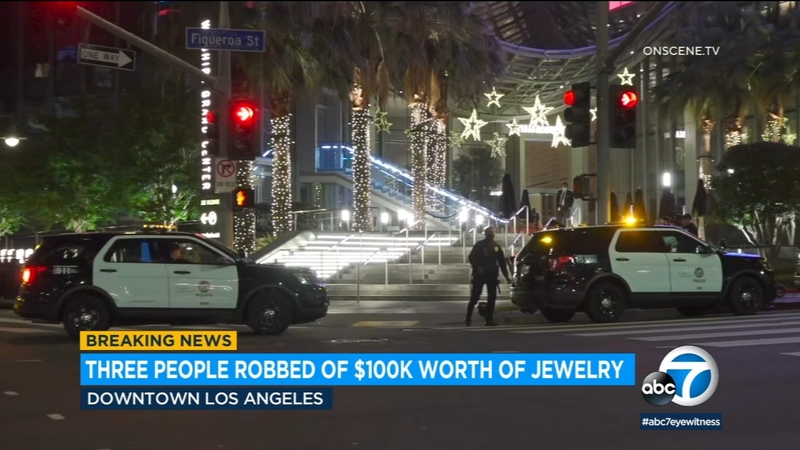 More than $100,000 worth of jewelry stolen in DTLA robbery, police say

DOWNTOWN LOS ANGELES (KABC) -- More than $100,000 worth of jewelry was stolen when robbers held three people at gunpoint at a hotel in downtown Los Angeles Tuesday morning.

It happened at the Intercontinental Hotel on Wilshire Boulevard at around 1:30 a.m.

According to police, two suspects got out of their car and robbed the victims near the valet area.

A security guard was assaulted as a group of suspects fled with expensive merchandise during a robbery at the Nordstrom store in Westfield Topanga mall.

The robbers got away with a number of rings and a watch before taking off, investigators said. No injuries were reported.

A description of the suspects and the vehicle they were in were not immediately available.

Anyone with information on this incident is urged to contact police.

Anonymous tips can be submitted through LA Crime Stoppers by calling 1-800-222-TIPS (8477) or by downloading the "P3 Tips" app, which is available on Apple app store and Google Play.

New security measures are in place a day after a brazen crime which can only be described as a flash mob robbery at a California Nordstrom store.