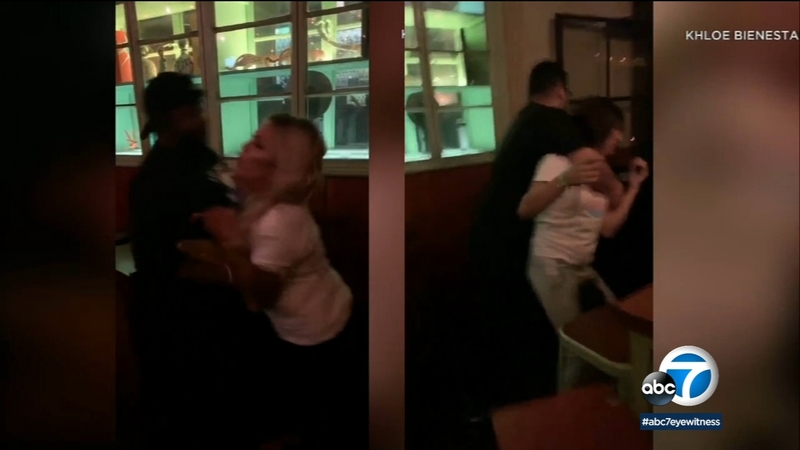 DOWNTOWN LOS ANGELES (KABC) -- An altercation in a downtown Los Angeles bar resulted in the forced removal of two groups of people, including two transgender women, following festivities for the DTLA Proud festival.

The incident was reported late Friday night at Las Perlas bar on East 6th Street, according to the Los Angeles Police Department. Police said they filed a hate crime report and the department was investigating the incident.

Whether in public, or inside of a private establishment, all Angelenos deserve the freedom to coexist in harmony. Although we cannot comment on an ongoing investigation, rest assured the LAPD will thoroughly investigate the incident at Las Perlas. https://t.co/eUPqvsMdk8

The group of co-workers were celebrating the LGBTQ community at DTLA Proud Festival before they say they became victims of a hate crime at the bar.

Video taken inside the bar shows the three co-workers being forcibly taken outside by security guards.

They say the altercation began when one of the woman in the group was verbally attacked with transphobic slurs by another woman and man.

In a written statement, bar managers said both groups were asked to leave and the guards had to remove those who refused to go, in accordance with company policy.

The statement reads in part: "This was a rare and unfortunate incident as Las Perlas has provided an inclusive and welcoming environment since it opened almost 10 years ago."

Jennifer Bianchi and Khloe Rios are upset with the way the bar managers managed the situation.

"The (security guards) from the place were the ones who used excessive force to remove us from the premises," Rios said.

Rios said the same excessive force was not used to remove the people that allegedly used the transphobic slurs.