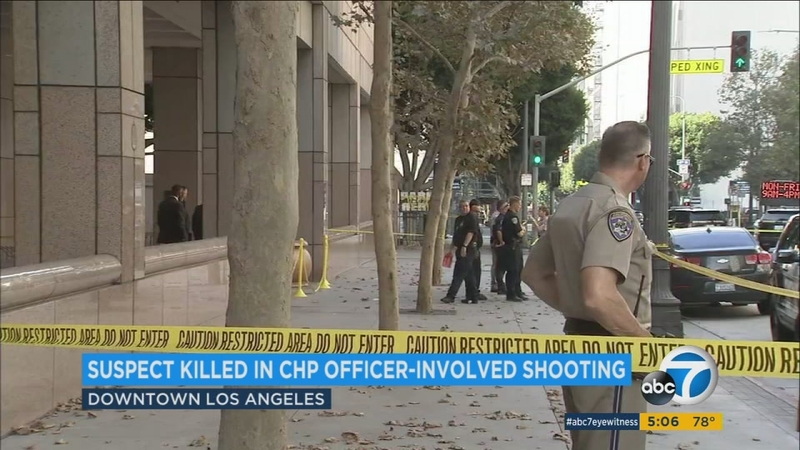 DOWNTOWN LOS ANGELES (KABC) -- A suspect was fatally shot by a California Highway Patrol officer after the man, with his hands hidden, took an "aggressive shooting stance" inside a downtown Los Angeles building on Wednesday, authorities said.

The incident occurred shortly after 6 a.m. in the security check area inside the Ronald Reagan State Building near 3rd and Spring streets.

The building was closed to the public at the time, but the suspect entered behind an employee, according to CHP Sgt. Saul Gomez.

The suspect, whose hands were covered in a bag, began yelling at the employees inside the building, ordering them to "get down," Gomez said.

Authorities said the man took an "aggressive shooting stance," and that's when a CHP officer fired three to five rounds. That officer was on duty at the building at the time of the incident.

The suspect, who was described as a 42-year-old man, was pronounced dead at the scene. He was not a current or former employee at the building, officials said. It was not known if he was armed.


No officers were injured in the incident.

Gomez said there is a high probability the incident was captured on surveillance cameras. The suspect's motive was not known. Gomez said it's possible that he was not from California, according to an ID found at the scene.

Parts of building and Spring Street between 3rd and 4th streets were shut down due to the investigation, police said.