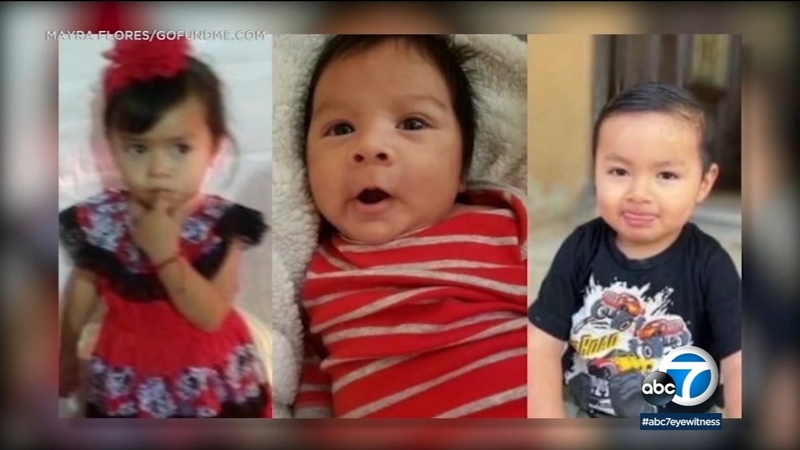 EAST LOS ANGELES (KABC) -- A 28-year-old woman accused of killing her three young children inside their East Los Angeles home has been charged with three counts each of murder and assault on a child causing death, according to the Los Angeles County District Attorney's office.

Cameras were not allowed in court for Sandra Chico's first appearance before a judge. Her arraignment was postponed until mid-July, and her bail was increased from $2 million to $6 million.

"In an instant, three innocent children were taken from us and we are crestfallen," District Attorney George Gascón said in a statement. "Nothing is more heartbreaking than the tragic betrayal of a parent failing to protect their children."

The victims, Chico's three small children, were identified as 4-year-old Mia Rodriguez, her 3-year-old brother Mason Rodriguez and their baby brother Milan Rodriguez, who was just under two months old.

Sheriff's deputies responded to the home on the 600 block of South Ferris Avenue Monday just before 1 p.m. Sheriff's deputies found the children unresponsive and not breathing at the home. Deputies and paramedics attempted life-saving measures, but all three children were pronounced dead at the scene.

Sheriff's investigators aren't saying how they were killed, but family members say Chico suffocated them and then tried to kill herself. On Tuesday, L.A. County Sheriff Alex Villanueva said there were no signs of trouble at the family home.

"There was no forewarning of any kind. There was no repeated calls for service. DCFS was not involved. There was no allegations of child abuse. This was out of the blue tragedy," Villanueva said.

On Tuesday night, a candlelight vigil was held at the family home. Some of Chico's relatives came out and asked people not to pass judgement over the young mother, adding that she has been dealing with some mental health issues.

The children's paternal grandmother said the father was at work during the incident.

"I won't criticize her," the grandmother said in Spanish. "I wish her well. She is also a victim of her illness, which is depression. And even more so during these times that people couldn't go out. She never went out for anything."

"I'm getting messages from a lot of people saying that they're judging my sister-in-law. They're telling her that she was a bad mother," said Arturo Zerzeo. "But the only thing I ask is don't judge. I know it's hard, but don't judge."

The agency urged anyone with information about the case to call the sheriff's Homicide Bureau at (323) 890-5500. Anonymous tips may be provided to L.A. Regional Crime Stoppers at (800) 222-TIPS.

A GoFundMe page has been established to help the family pay for the children's funeral expenses.