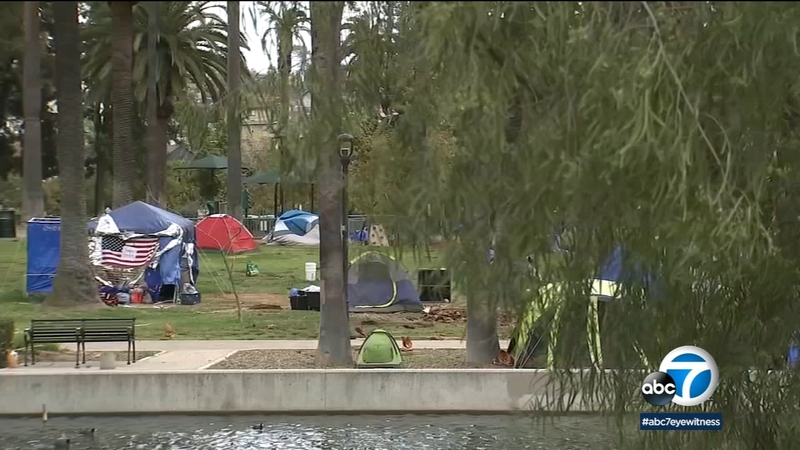 ECHO PARK, LOS ANGELES (CNS) -- Only 17 out of 183 homeless people who were removed from an Echo Park Lake encampment last March have been placed in long-term housing, according to a report published Wednesday by the UCLA Luskin Institute on Inequality and Democracy.

According to the report, the whereabouts of 82 of the Echo Park Lake homeless residents were unknown to LAHSA as of Feb. 9, and 15 had returned to the street.

Forty-eight people are waiting for housing, many in Project Roomkey sites, according to the report, which added that six others have died since last March. The report does not include information about the remaining 15 people.

"Many of the Echo Park Lake placements were in Project Roomkey, a temporary program that utilizes hotel rooms as non-congregate shelter but presented to residents facing displacement as a guaranteed path to housing," according to the report.

"We find a churning system of project enrollments that gives the lie to shelter-resistance. While the unhoused are willing to repeatedly respond to street outreach and enroll in programs, the system is a shuffle, where people are moved from one placement to another creating the appearance of activity but with little change in their housing status."

Researchers interviewed 41 of the park's former residents, four of whom were housed, but the report noted that they were housed "mainly through social networks and community support."

Councilman Mitch O'Farrell, who came under fire from many homeless advocates during and after the clearing of the park's encampment, has championed the effort as "a very successful housing operation."

Days before the closure, his office announced the city was planning to close the park and clear out its residents to perform more than $500,000 in repairs and restoration due to damage caused by people living in the park. Some of the neighborhood's residents had also complained about the group's trash and said they no longer felt safe visiting the park, and city officials said multiple deaths and instances of sexual abuse had occurred in the encampment.

The removal effort on March 25, 2021, was met with large protests, in which hundreds of officers descended on Echo Park and arrested about 180 people, including journalists. Protesters blasted the city for forcing the park's residents out of an area that had grown into what they called a supportive community during the pandemic -- including a vegetable garden, working showers and a shared kitchen.

"The situation that existed at Echo Park Lake prior to March 2021 was not safe for anyone -- housed or unhoused, many of whom were being victimized themselves. The claim that the city 'staged a police invasion' is untrue," O'Farrell said Wednesday in response to the report. "What actually happened was a three-month outreach process that led to a warm handoff to LAHSA and transitional housing placements for nearly 200 people who had been living in a dangerous, deadly environment.

"It is beyond absurd to claim that Echo Park Lake -- where people were living in squalor and filth, in an environment that included rampant open-air drug use, at least one drive-by shooting, at least one machete attack, reported prostitution, reported trafficking, and four deaths -- was somehow more humane than living in a safe, secure, managed environment."

"Since last spring, we have continued to stand up hundreds more safe, secure spaces for unhoused residents in the area, with more on the way. That's hundreds more people traumatized by homelessness who are coming indoors and receiving the services they so badly need. Since then, crime is down significantly in the park and surrounding neighborhood, and Echo Park Lake has remained safe, clean and accessible for all who wish to enjoy this shared public space. It will remain that way," he added.

A coalition of faculty at USC, UCLA, UC Irvine and Occidental College came out against the clearing, writing a letter to Mayor Eric Garcetti in opposition in the days after the park was closed. The letter pointed out that most of the housing options were temporary and some were in congregate shelters amid a pandemic.

They added that some Project Roomkey residents claim they live under strict curfews and prison-like conditions while living in the city-provided hotels, and they feel like they have to "trade their autonomy and dignity for a bed."