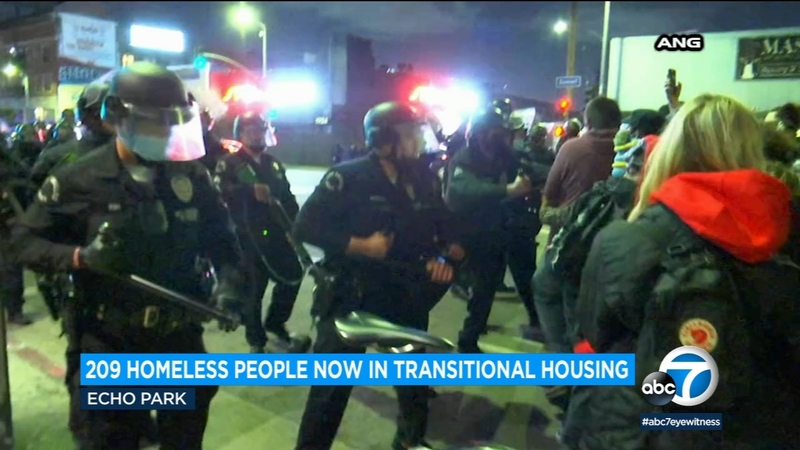 ECHO PARK, LOS ANGELES (KABC) -- City Councilman Mitch O'Farrell claimed success in the effort to clean up Echo Park Lake, with the last of more than 200 homeless people removed, and a $500,000 repair and restoration project underway after days of protests that included more than 180 arrests.

The last two people remaining inside the park were arrested Friday morning.

The men were identified by Ground Game L.A. to the Los Angeles Times as Ayman Ahmed and David Busch-Lilly. Police said they were arrested for erecting a tent in a city park and using park areas or facilities for a purpose contrary or inconsistent to its specific or designated purpose.

Both men were later released.

"This week showed us that we are capable of changing the status quo when it comes to our approach to homelessness in Los Angeles, which has been a failure in the past, both for our most vulnerable residents who seek shelter and services and Angelenos who demand safe and secure access to their public spaces,'' said O'Farrell, who represents the district and is spearheading the cleanup effort.

"With thoughtful and compassionate action, we can strike this balance, which is what we did at Echo Park Lake, where we have now placed 209 people experiencing homelessness into transitional shelter with supportive services, medical care, and other humane and necessary resources.

"...A small but vocal contingent of outside groups sought to escalate the situation, repeatedly issuing credible threats in an attempt to disrupt our efforts to place people into housing,'' O'Farrell continued. "Everyone has the right to peacefully assemble but it is simply unacceptable for anyone to thwart our work to house people.''

Mayor Eric Garcetti said Friday that police were at the park "to make sure that folks wouldn't surge in and prevent the housing operation that was happening and the ultimate closing to clean up the lake.''

Some homeless advocates faced off with LAPD Thursday evening after the groups clashed the previous night.

"Taking militarized police action to displace people who are already displaced is cruel and does nothing to bolster public safety. Mass arrests of protesters, legal observers and journalists will not keep the city's brutal, ill-conceived actions from being known. The city leaders who approved this approach should be held accountable,'' the ACLU said.

"In this time of crises in both the economy and public health, the city should seek solutions in developing permanent, affordable housing and appropriate services for people who are unhoused.''

O'Farrell said Saturday that he was "disappointed that some local elected officials, valuing politics over finding real housing solutions in their own districts, have sought to mischaracterize our successful work to house people. They have also wrongly conflated our efforts to house individuals with our larger conversations about police reform. In addition to misleading people, this rhetoric does a great disservice to Angelenos, both unhoused and housed, and it needs to stop.''

O'Farrell might have been referring to Councilman Mike Bonin, who called the police response "a disgrace.''

Bonin tweeted: "A neighborhood in lockdown. Hundreds of cops in riot gear. Reporters being zip-tied and detained. Protesters being kettled and arrested. This is a disgrace and it did not have to happen. It's a shameful day for Los Angeles.''

Police declared an unlawful assembly at about 8:30 p.m. Thursday at Lemoyne Street and Park Avenue, in front of O'Farrell's district office, after "several instigators in the crowd demonstrated a willful intent to disrupt the peaceful activity and began to use strobe lights against the officers, an activity that has the potential to cause significant injury to the eyes.''

The department said two officers sustained minor injuries during the protests, and O'Farrell's office and an LAPD vehicle were damaged.

"We made significant progress (Thursday) toward our goal of housing everyone at the park and moved an additional 32 unhoused individuals into transitional housing,'' O'Farrell said in a statement issued at 10:34 p.m. "Almost 200 of the park's unhoused population has accepted and been placed in shelter options through Project Roomkey, Project Homekey, A Bridge Home and winter shelter.''

Many residents have complained about the trash and public safety issues in the park, saying they no longer felt safe visiting the facility.