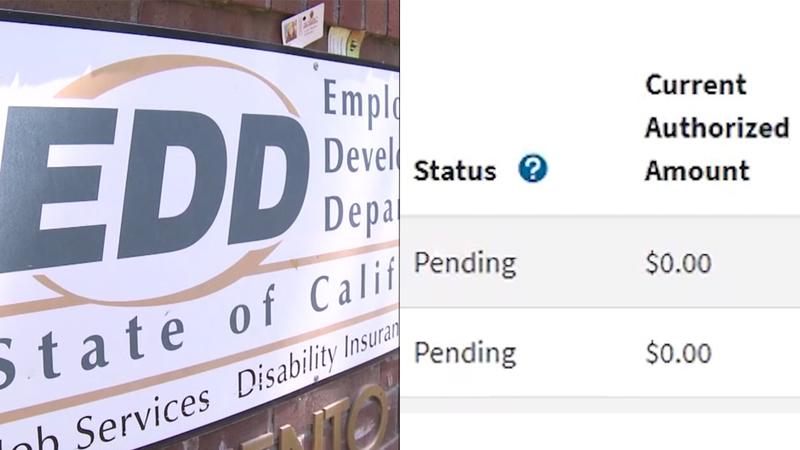 SAN JOSE, Calif. -- The deadline is fast approaching for millions of Californians who are about to lose their unemployment benefits. Federal money for pandemic relief officially expires on Saturday and yet there are still thousands of Californians waiting for benefits they never received. Some worry their benefits will expire before they even get them.

Our sister station KGO-TV in San Francisco is hearing from many who have been without any income for months -- now they're watching as the clock runs out on all pandemic benefits. But what if you never got yours? Many say it's hard to find a job when bills are piling up.

Syonna Varguez of San Jose lost her job as an employee recruiter when the pandemic hit. "I haven't received one single payment. I've been looking for work," she said.

She managed to find work at a cannabis dispensary and worked all year -- only to get laid off from that job in May.

The EDD awarded her unemployment benefits back in May, but still hasn't paid her a penny.

"They told me I have to wait five months, there's a five month waiting period," said Varguez.

The EDD told her it will have to conduct an interview to resolve "eligibility issues" before she can get paid, but there is no telling when that might happen.

Varguez is even more frustrated, saying she already interviewed with EDD and still, her account shows she needs a phone interview. State lawmakers in her district tell her it can take up to five months to get an interview. Not only that, EDD warns it may call at any time, with no caller ID, and missing the call can mean going to the end of the line.

After 25 years of primarily providing service by phone, why doesn't the EDD have a state-of-the-art system?

"And so at this point, I'm just willing to take any kind of work and try to start working. Because I can't even get an answer," said Varguez.

Now she's unable to help her mom pay rent. The family of five just got an eviction notice.

Federal unemployment benefits are about to expire on Sept. 4, which affects up to two million Californians.

"I'm very worried. I don't even know what that means for me," Varguez said.

The federal pandemic programs aimed at helping jobless workers during the health crisis are now ending for good, which had included payments to non-traditional workers like independent contractors, the self-employed and gig workers.

The program known as Pandemic Emergency Unemployment Compensation (PEUC) is also ending for good. That program extended benefits for up to 53 weeks for those who are out of work for a prolonged period due to the pandemic.

MORE: Most Californians to receive another stimulus check -- here's how much and when to expect it

Even those who have more weeks left on their extension will be cut off.

Statistics show about two million Californians who are still collecting benefits will be cut off entirely on Saturday.

And, among the biggest changes, the federal government will stop paying the $300 per week bonus that goes to everyone on unemployment.

However, even though these benefits expire on Sept. 4, folks like Varguez would still get back pay for benefits they should have received up to now.

EDD will pay those retroactively to claimants who had been eligible.

Varguez says she can't wait five months for EDD to decide whether to pay her. "We can't even afford groceries right now, it's really hard," she said.

With savings gone, no money for transportation, and an eviction notice on the door, Varguez says it's hard to find a job. She and her mom just hope the EDD comes through

"I promised her unemployment is coming. I promised but it's hard because I'm not sure it really is," Varguez said.

The EDD is encouraging everyone on unemployment to look for a job. It's begun referring workers to job boards as well as like assistance like CalFresh and rental assistance. Visit this link for their "Other Assistance Programs" resources.