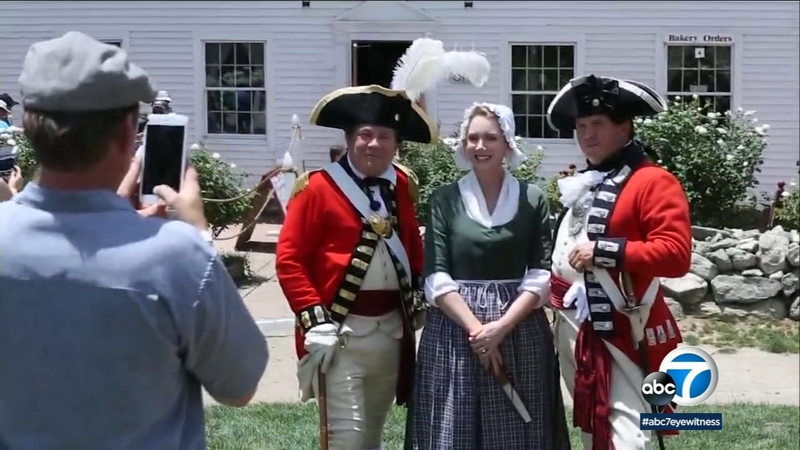 But it's a war of words that has the farm's principal shareholder, Jim Riley, firing back at critics who accused him of being a racist following remarks he made on social media this past summer.

"My ideas are not racist, not bigoted and I will call that out as an outrageous lie for anyone who is saying it about us," said Riley outside U.S. District Court in Riverside.

In now deleted tweets, Riley quipped, "What is this country coming to if a girl can't even use her bosoms to smack customers and then sue the president for unwanted sexual advances?" In other posts, Riley likens Black Lives Matters to a terrorist group and in what some may see as a mocking reference to the LGBTQ community, he alludes to his generation as the last to have two genders.

The comments were made on Riley's private social media accounts and not posted to Riley's Farm accounts or website.

Riley says the comments were made during passionate debates on current issues.

As a result of the backlash, Claremont Unified School District canceled all its 2018-2019 school field trips to Riley's Farm.

Riley responded by filing a lawsuit against the school district, school board and two elementary school principals saying they infringed on his First Amendment right to free speech and harmed his business.

"Somebody dug up some of Mr. Riley's Twitter comments and some passionate exchanges with people who differed politically with him and decided to put the rhetorical killshot label bigoted on them," said Thomas Eastmond, Riley's attorney.

On Monday, a motion to dismiss the lawsuit was filed by the school district's attorney. According to the motion, parents who objected to Riley's posts asked to have their children removed from attending field trips to the farm.

As a result, the district canceled the annual trips it has held to Riley's Farm since 2001.

"The school district has cited a couple of parents who made complaints. We don't know how many there were. We suspect it was not many given how popular these trips are," said Eastmond.

Parents outside Sumner Danbury Elementary School, whose principal is named in the lawsuit, had mixed reactions.

Nick Robles doesn't agree with Riley's statements but doesn't feel it should punish children from learning.

"We want our kids to go to any farm to any field trip to have fun anywhere. That's what we want for our kids, our best," said Robles.

Other school districts are also holding off on visits to the farm and they too could face a lawsuit.

"Private citizens can boycott on their own but inducing public agencies to take action to violate the First Amendment can potentially give those people liability," said Eastmond.

The lawsuit is seeking monetary compensation for damages to Riley's reputation and emotional distress including $10 million in future lost revenue.

As for the motion to dismiss, the U.S. federal judge hearing the matter has asked both sides to file supplemental briefs by Dec. 17 before making a decision.