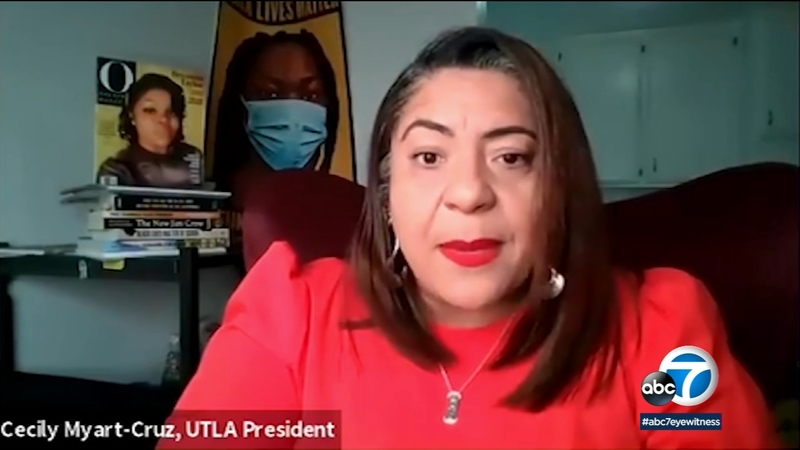 LOS ANGELES (KABC) -- Members of the Los Angeles teachers union voted overwhelmingly Friday to reject what it calls an "unsafe" return to the classroom unless certain demands are met.

The vote comes on the heels of Gov. Gavin Newsom signing a $6.6-billion bill offering school districts a major financial incentive to get students back into classrooms.

For LAUSD in-person teaching to resume, United Teachers Los Angeles is demanding L.A. County move out of the state's purple tier, returning staff must be vaccinated or have access to vaccines and coronavirus safety measures must be in place on campus.

Of the 24,580 ballots cast, 91% rejected a return to classrooms, according to union president Cecily Myart-Cruz.

"This vote signals that in these most trying times, our members will not accept a rushed return that would endanger the safety of educators, students, and families," Myart-Cruz said in a statement.

All of UTLA's demands, however, could potentially be met by the end of March or early April. The county's average daily rate of new COVID cases dropped to 7.2 per 100,000 residents this week, and barring a sudden surge, will likely meet the threshold to move into the "red" tier of the state economic-recovery matrix by next week. The county will have to maintain the low case rate for at least two weeks to actually advance into the "red" tier.

Distribution of vaccine is accelerating nationwide as California sees a drop in cases and school districts plan for reopening.

The state, meanwhile, has allotted 25,000 vaccine doses to the LAUSD - the amount Superintendent Austin Beutner has said would be needed to vaccinate the staff needed to reopen elementary schools. Teachers became eligible for vaccines this week, and the district is operating a large-scale vaccine site dedicated to school workers at SoFi Stadium in Inglewood.

Beutner has previously touted the safety modifications already in place at schools, including state-of-the-art ventilation systems.

Newsom signed the school-reopening legislation Friday in a Zoom ceremony attended by a host of legislative and education leaders.

It does not require school districts to return students to classrooms or force parents to send their kids back to schools if they don't want to.

Instead, the law sets aside $2 billion for districts that offer in-person instruction by the end of March. Another $4.6 billion in spending goes to all districts to help students catch up on the material they have missed in the past year, but the law says districts must use at least 85% of that money on in-person learning.

To be eligible for the money, most districts will have to offer in-person learning for all elementary school grades. But the law does not require a return to classrooms for most middle and high school students. It also doesn't say how long students should be in a classroom each week, prompting fears some districts could return students for just one day per week and still be eligible for the money.

Newsom pointed to achievements being made in the fight against the virus, including the now 2.1% testing-positivity rate in the state, and the newly surpassed milestone of 10 million vaccinations administered, "more than all but five nations in the world.''