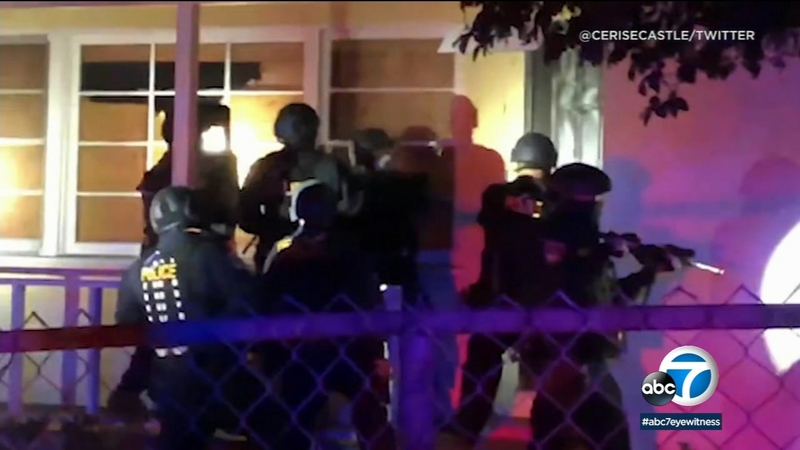 AIR7 HD was over the scene at Sheffield Avenue and Poplar Boulevard at around 9:30 p.m. as a line of CHP vehicles crowded the street, and officers in riot gear took people into custody.

Video showed a CHP tactical team ramming a door so they could enter.

A group of homeless activists, known as Reclaiming Our Homes, are now legally living in state-owned homes they once illegally occupied.

It appeared about 100 officers responded to the neighborhood.

Several officers were seen pushing back demonstrators that had gathered as the confrontations escalated. An unlawful assembly was declared by the CHP at 8:45 p.m. Wednesday.

In March, the group Reclaiming Our Homes started illegally occupying the Caltrans-owned homes in the area.
Caltrans purchased the homes to demolish for the expansion of the 710 Freeway, but that stalled in 2018 after decades of controversy.

Activists cite wanting to follow the state's stay-at-home order as one of the reasons for occupying the homes.

A video posted on YouTube purported to be from the group Reclaim and Rebuild Our Community includes a message to Gov. Gavin Newsom telling him that families have moved into several of the homes, claiming the families have been living in cars and are now sheltering in place'' inside the homes.

On Thursday, the homes were boarded up with signs that said "TRESSPASSING, LOITERING FORBIDDEN BY LAW."

"I understand that these people are homeless, I understand they want to have a roof on top of their heads, but last night got really out of control," said Sandra Martin, who has been living in the community for 24 years.

She said there are more than a dozen vacant homes on her block.

"You hear people, homeless, trying to break into the vacant houses," she said. "It's been really bad, you don't know who is coming into the house."

There were no details on how many people were removed overnight or how many were arrested.