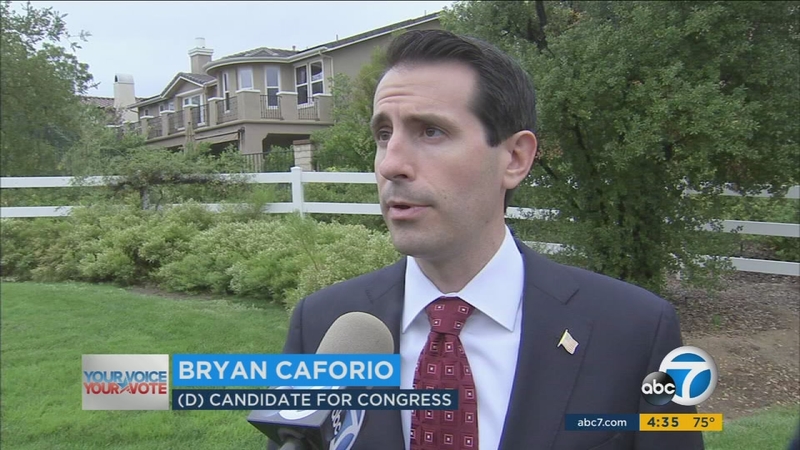 While Ryan's event was closed to the media, Knight's opponent in the congressional race, attorney Bryan Caforio, decided to hold a press event across the street.

"The party is running scared. They see how wildly out of touch Congressman Knight is," Caforio stated.

The campaign in the 25th District -- which includes parts of Santa Clarita, Simi Valley, Palmdale, Lancaster and the San Fernando Valley -- has been the closest and most expensive congressional race in Southern California.

Well-funded by national Democrats, Caforio has attempted to tie Knight to the Republican presidential nominee, Donald Trump, and flip the seat.

Knight pulled his support for Trump after the billionaire's lewd comments about women became public.

"There's been a lot of things that have been said in this campaign that I don't believe," Knight said in an earlier debate.

In a statement to Eyewitness News, Speaker Ryan described Knight as a former soldier and police officer with valuable congressional experience.

The 25th District race has also been impacted by Knight's former staff member, Dante Acosta, and his run for state Assembly.

Van Laar sent the allegations in an email that Knight was reportedly copied on.

"After congressman Knight learned of those allegations, he continued to stand up with Dante Acosta and try to promote his campaign," Caforio said.

Knight declined to be interviewed on camera but released a rebuttal statement from Acosta's accuser on Friday.

"Steve has always treated me with the utmost dignity and respect, and it is shameful that Bryan Caforio would politicize my personal pain... for his own political gain," Van Laar wrote.