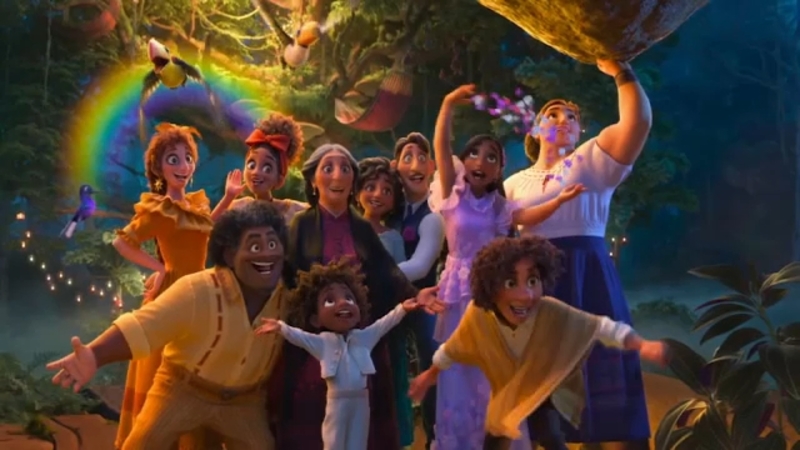 A new animated film opening in theaters in time for Thanksgiving features a family who lives in an enchanted house in a mythical place called "Encanto."

Each child in this family has been blessed with magical powers -- except for one daughter named Mirabel, and therein lies the heart of this enchanting tale.

The new picture is a musical with original songs from Lin-Manuel Miranda, who created "Hamilton."

Disney's latest film "Encanto" features original songs from Lin-Manuel Miranda, who said he was excited to be working with the production team from the very beginning.

"Encanto" is rooted in the culture of Colombia, just as "Coco" was firmly planted in Mexico. Both movies focus on family, and Miranda brought members of his real family to a screening on the Upper West Side.

"This is so much about sibling relationships," he said. "I drew on my relationship with my sister a lot, so I mean, I hope people like the movie, but I'm going to be watching my sister watching this movie."

Even more important to Miranda is the reaction of his two young sons.

"I have a 7-year-old and a 3-year-old boys at home, and they're the first and final audience," he said. "They will tell me, 'Daddy, this is boring,' or I'll catch them humming a song that they've heard me writing, and I'll say, 'OK, it got stuck in their head, we're in business.'"

Sandy Kenyon spoke to Lin-Manuel Miranda at the premiere of Disney's "Encanto."

To write these tunes, the composer went to the source.

The family man has a way of making cast members feel welcome, said Ravi Cabot-Conyers, who provides the voice of Antonio, a young man who can talk to animals.

"He is so funny, so fun, so energetic, so kind," Cabot-Conyers said. "He helps people."

The two directors of "Encanto," Jared Bush and Byron Howard, made "Zootopia," and Howard co-directed "Tangled."

This great family entertainment from Walt Disney Animation Studios, owned by the same parent company as this ABC station.

Disney's "Encanto" introduces us to a loving, magical yet dysfunctional Colombian family and their mystical home, with a talented cast performing catchy tunes by Lin-Manuel Miranda.