'American Idol' pays tribute to Woodstock, whittles contestants down to 5 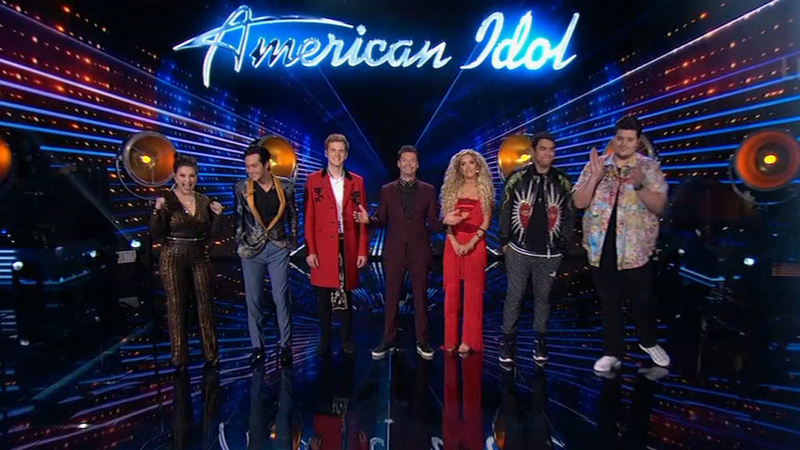 LOS ANGELES (KABC) -- The "American Idol" top six each had two chances to wow America this week, as we inch closer to the May 19 finale.

Each contestant performed what was deemed a "showstopper" song; they also started off singing something that had been performed back in 1969 at the famed Woodstock music festival.

Madison VanDenburg kicked things off with a Woodstock classic, Janis Joplin's "Piece of my Heart." The judges liked seeing her "rock it out"; Lionel Richie is loving her attitude... he calls it star attitude.

Laine Hardy sang Joe Cocker's "I Don't Need No Doctor" and the tune fit him perfectly; a little country, a little rock, a little blues. Katy Perry thinks Laine has figured out the "chess game" that is this show, and she thinks it is time for him to push himself a little harder.

Katy says she's giving off a Bonnie Raitt vibe but she wants Laci to move more on stage; Lionel also reminded her to play to the crowd in front of her.

Alejandro Aranda went deep into the '60's with Jefferson Airplane's psychedelic "White Rabbit." The judges are clearly fans, and Katy and Lionel want him to keep digging and feeling the music in his own way.

Wade Cota also went to the Joe Cocker songbook to sing "With a Little Help from My Friends." The crowd went crazy for this performance; Lionel called it a perfect song for Wade. Katy added it was the best performance so far this round; and Luke says he elevated the game and spiritually moved the whole room.

For the second round, Lauren Daigle served as a special mentor to the top six. Madison was first up and hit it off with Lauren right away. She's tackling a tough Celine Dion song, "I Surrender." Katy says Madison is doing exactly what the judges have been asking her to do. Lionel said she didn't do a "Celine song"... she made it a "Madison song."

Alejandro returned for his second song and he's doing an original; singing and playing acoustic guitar. Luke says he prays America understands how challenging that performance was; Lionel loved watching Alejandro sing Alejandro, and thinks he already has a career; Katy thinks this was the best he's ever been on the show to date.

Laci's show-stopping song is Journey's "Open Arms." She got a real vocal lesson from Lauren... she said it's her first one ever! Lionel complimented her control; Katy told Laci she has multi-dimensional, crossover potential for her career.

Jeremiah chose "Somewhere" from "West Side Story" and Lauren asked him to sing it a cappella during their rehearsal so he could really emphasize the emotion of the song. Katy says he took what Lauren said to heart and it did so much for him; she says she was locked into every single word he sang.

Wade sang "Through the Valley" by Shawn James; but it was his conversation with Lauren about it being OK to mess up and move on really resonated with him more than learning about any techniques. Luke said it felt like Wade had a Johnny Cash moment; Lionel said we are all believers.

Laine was the last performer to take the stage, and he hit it off with Lauren because they're both from Louisiana. He's singing Chuck Berry's "Johnny B. Goode" and it needs to have some movement, but that is not his strong suit. Lauren gave him a quick dance lesson to loosen him up. Lionel said it was the perfect song with the perfect attitude; Katy screamed like a teen-age girl.

The results are in and here are the top four artists America voted to move on: Madison, Laine, Alejandro and Wade. The judges decide to use their one save of the season and after a brief discussion, they put through a clearly stunned Laci.