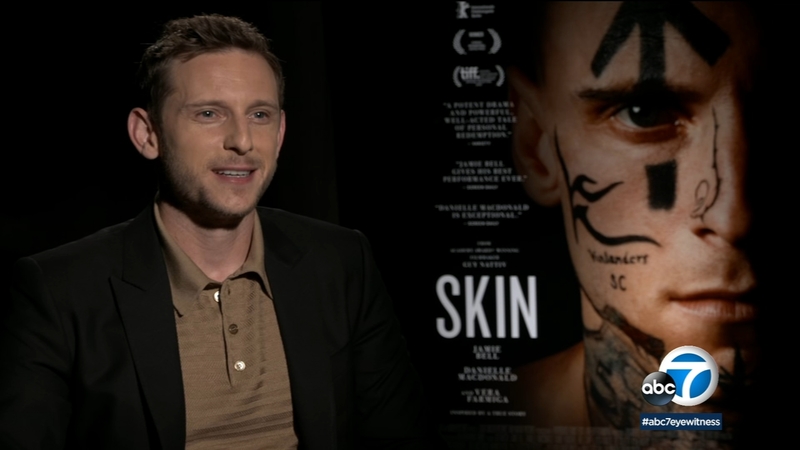 HOLLYWOOD (KABC) -- Jamie Bell broke into show business almost 20 years ago as the star of the hit film, "Billy Elliott." Earlier this summer, he played Elton John's writing partner Bernie Taupin in the hit musical, "Rocketman." Now, Bell is taking on his most dramatic role to date in the new movie, "Skin."

Bell plays a tattooed white supremacist, who earned racist tattoos by performing hate crimes for the skinheads who raised him. This was not an easy role for him to play.

"When you're wearing that every day, you know, and you're playing scenes like that, it affects you," said Bell. "So it was a big moral choice for me, you know? Are we going to give this guy his screen time, you know? Are we going to tell his story and give it the kind of big screen treatment? So I really was kind of flip floppy on that a lot. I was quite on a see-saw morally about it."

"Skin" is based on the true story of a man who was once one of the FBI's most sought after white supremacists. But the FBI and the woman he loves help him transform his life to something better. The real guy is now in the witness protection program; but Bell did get the chance to meet him.

"You know, I was very honest with him," said Bell. "I said, 'I don't like what you've done. I don't like the life that you have led and the choices you've made and only you will have to reckon with that for the rest of your life.' And I think, as an actor, you always try not to judge the subject that you're portraying. But in this instance, it was very difficult."

During filming, Bell would spend hours having printed tattoos applied to his body.

"We had no money to make this movie. I mean, literally peanuts," said Bell. "There were times when I would finish a week of filming on a Friday and I'd say to Stevie, my make-up guy, like, 'I just can't wait to get these off. Get in the shower, not be this person anymore.' And he was, like, 'Sorry, man. We ran out of money. We can't print anymore. You have to keep them on!"