Couric will stand behind the iconic lectern for 2 weeks starting Monday, March 8
KABC Katie Couric is among several celebrities who have been guest-hosting "Jeopardy!" (Jeopardy!)

In the aftermath of longtime host Alex Trebek's death in November, the beloved game show has been featuring a roster of guest hosts that so far has included Mike Richards, the program's executive producer, and Ken Jennings, the Jeopardy! Greatest of All Time and consulting producer.

With each guest host's appearance, a donation will be made to a charity of their choice. The amount donated will equal the cumulative winnings of the contestants that compete during the weeks they serve as guest host.

As a part of Couric's appearance, a donation will be made to Stand Up To Cancer, a division of the Entertainment Industry Foundation, which raises funds to accelerate the pace of research to get new therapies to patients quickly and save lives now. The donation will be designated to pancreatic cancer research funded by Stand Up To Cancer and the Lustgarten Foundation through their Pancreatic Cancer Collective initiative.

Couric was the first woman to solo anchor a network evening newscast, serving as anchor and managing editor of the CBS Evening News from 2006 to 2011 following fifteen years as co-anchor of NBC's Today show. Couric has won a duPont-Columbia, a Peabody, two Edward R. Murrows, a Walter Cronkite Award, and multiple Emmys. She was twice named one of TIME magazine's 100 most influential people and is the only woman to win Glamour magazine's Woman of the Year award three times.

Couric is the Founder of Katie Couric Media (KCM), which collaborates with global brands to create premium content such as a daily newsletter called Wake-Up Call, documentaries, digital series and podcasts on important social and cultural issues.

Couric is working on a memoir that will be published in the fall of 2021.
Report a correction or typo
Related topics:
arts & entertainmententertainmentalex trebekkatie couricgame showjeopardy
Copyright © 2021 KABC-TV. All Rights Reserved.
JEOPARDY 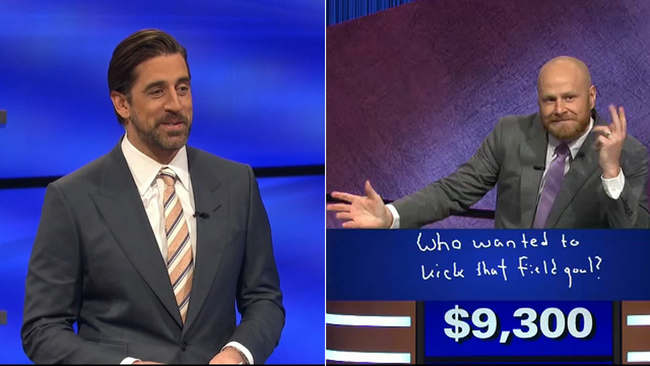