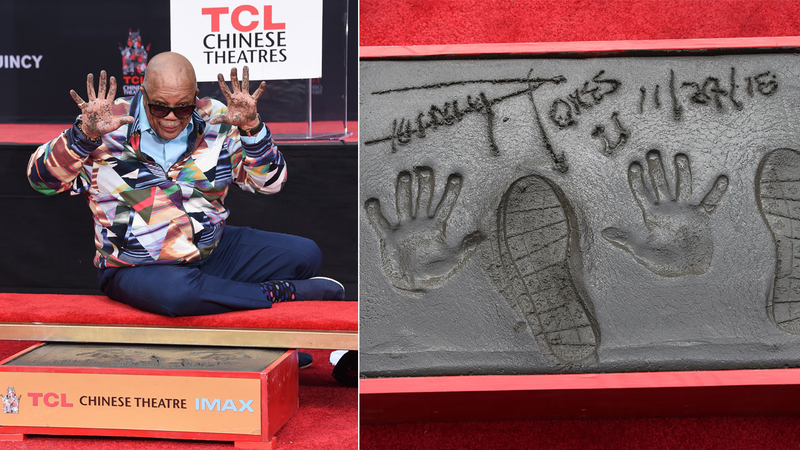 HOLLYWOOD, LOS ANGELES (KABC) -- Quincy Jones was honored Tuesday in Hollywood, where the music mogul and pioneer dipped his hands and feet in cement outside the TCL Chinese Theatre.

The ceremony for the 85-year-old Oscar- and Grammy-winning film composer took place at 11 a.m. in the forefront of the historic theater.

Jones said he was overwhelmed at the honor, reflecting back on his teen years in Seattle when he would watch movies in awe.

"I was so addicted at 15 years old, I can't tell you," Jones said. "... I used to sit in the theater and think about composing music for these films. And I was absolutely addicted. I could never have imagined that those dreams would lead me to here, to this moment, and to be honest, it is a little bit overwhelming."

"...Since he has had his hands and foot in everything you've ever loved, this seems like the most literal, best way to celebrate him," his daughter said. "...The truth is we can never honor the wonderful, unparalleled, indelible career of Quincy Jones enough."

After rising to fame as a bandleader, Jones got his break in the film industry when Sidney Lumet hired him to compose the score for the 1964 film "The Pawnbroker." He went on to work on scores and original songs for more than three dozen films, earning Oscar nominations for many.

Jones also won a Tony Award for the musical revival of "The Color Purple," and won an Emmy for his composing work on the television miniseries "Roots."

His career has also paired him with some of the biggest names in entertainment like Michael Jackson, Lionel Richie, Will Smith and more.

Jones is the first film composer to be honored in the famed Chinese Theatre forecourt. The honor came on the heels of the Netflix documentary about his life, "Quincy," which was released in September.