'Rogue One: A Star Wars Story' fans camp out day ahead of release 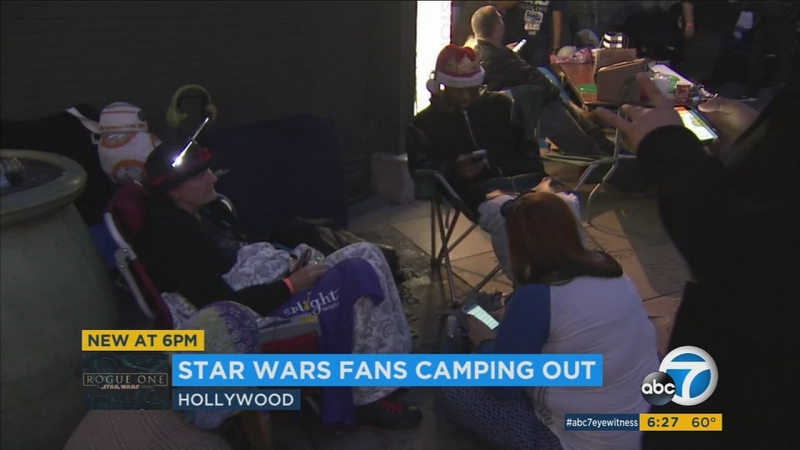 'Rogue One' fans camp out day ahead of release

HOLLYWOOD, LOS ANGELES (KABC) -- For "Star Wars" fans, it may be a lack of patience, an over-abundance of excitement or maybe a little bit of both because some of them were camping out Wednesday night to see "Rogue One: A Star Wars Story."

The countdown to the film was on and fans were camping out in front of the TCL Chinese Theatre to mark the occasion.

"Rogue One" is set in between episodes 3 and 4 and tells the tale of how princess Leia came into possession of plans for the death star. It's also another chance for self-described "Star Wars geeks" to be a part of history.

"Geeky community is just a really strong force that brings us all together, pardon the pun," joked Lavonne Dominguez, of Los Alamitos.

Fans have it easy this year. When Episode 1 came out in 1999, fans camped out for six weeks. They did it again last year for Episode 7.

"Last year, I came at the beginning and never left, so it was about 12 and a half days," shared fan Nathan Clukey.

Meantime, for fans that can't make it to the opening of "Rogue One," Uber was sending "Rogue One" to them with an "X-Wing Carship" -- able to be requested by users to show up at their front door.

"We get the request, we pull up to wherever their location is, and they get a chance to take pictures and get into the car; put on the helmet and do the whole experience," explained Heidi Vance of Uber's global marketing department.

As for those back at TCL Chinese Theatre, they had their food for the night and umbrellas as protection in case it rains. More importantly, they were ready for tomorrow for the opening of "Rogue One."