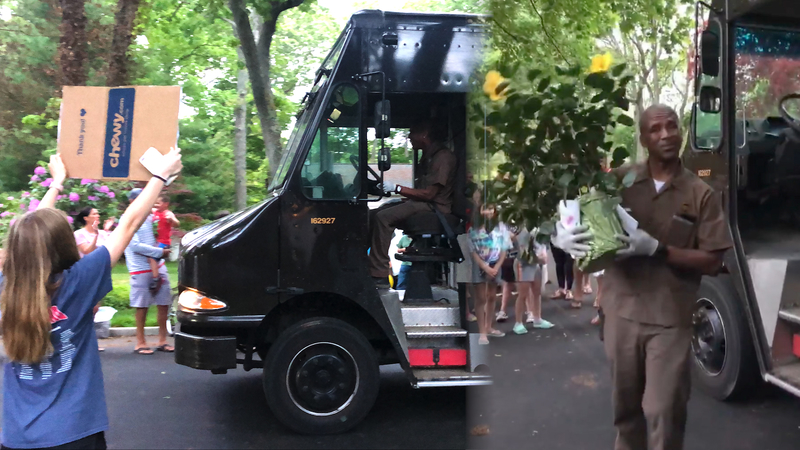 SMITHTOWN, New York -- Since the coronavirus pandemic began UPS driver Gregory Watkins Sr. has been picking up extra shifts and working longer hours. Watkins has been driving with UPS since 1995 and now has been on his current route in Smithtown, Long Island for over 13 years.

The community has grown to love Greg, for his kindness towards others and his infectious good attitude, four women in the community decided that it was time to show Watkins the same appreciation in return.

It was a route like any other day until Watkins received a text from one of his neighbors to come right away for some assistance.

As soon as Watkins turned his truck to head towards where help was needed, he saw a line of cars that filled up the street and a large group holding a sea of signs with his name on it.

"I started driving through and I was just blown away at what was going on," said Watkins. "I just find it amazing that they took the time out to plan this for me. I'm just so humbled by the whole thing, I'm still on cloud nine."

Pictures and videos captured the beautiful moment of Watkins and the community, some of which have circled the internet going viral.

In the video, Watkins is seen pulling into the community with his truck hearing shouts of his name, being presented with signs, and taking a moment to thank everyone for how grateful he is to deliver to them.

"I'm very thankful," said Watkins. "I'm just blessed to know each and every one of them."