This video is graphic and disturbing, but we are distributing it to show how quickly and unexpectedly these attacks happened.
KGO
By Dion Lim and Matt Boone 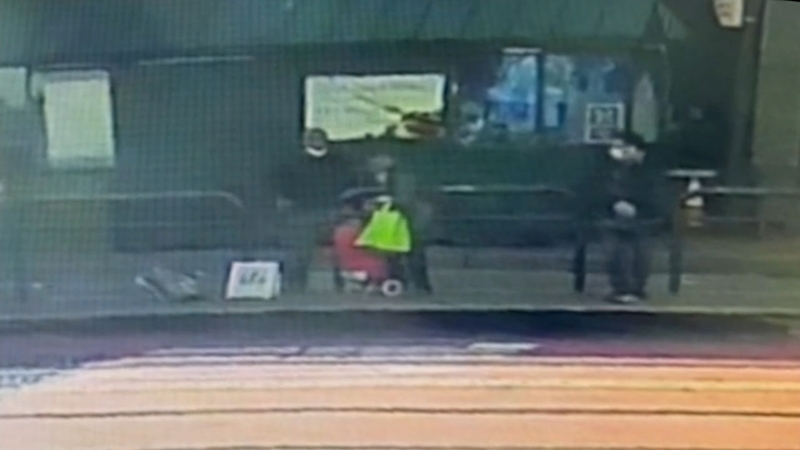 SAN FRANCISCO -- After much thought and discussion, I've decided to share a shocking video of the moment two Asian senior women, ages 65 and 85, were stabbed along Market Street in San Francisco this week.

I obtained this video through sources and spent a great deal of time debating whether or not to release it to the public. I was also provided an image of the x-ray showing the weapon used. It was still inside Mrs. Chui Fong's body at the time it was taken.

The force used to stab her was so great the handle broke off and the blade remained in her body.

In journalism, there should be a purpose to what is shown. It is not to provide shock value, clicks or "likes" on social media. One needs to ask "what is the context behind this video?" Without context, it has no purpose.

In this case, my team and I felt like it was important to visualize what happened so the audience understands the severity of the crime. This was not a stabbing involving a pocket knife. It was a serrated blade larger than Mrs. Fong's arm.

This is the x-ray of the knife in 85-year old Mrs. Fong’s body.
⠀
Like my previous Tweet of the video showing the stabbing— I sat on this photo & debated if showing it provided value & context. Here is why my team & I believe it can.

This video provides a clear look of how it happened. You can see how calmly the suspect approaches the woman. There are others standing nearby yet these two seniors were the ones the suspect, Patrick Thompson, allegedly chose as victims.

The video also shows the quick thinking of others and how bystanders rushed to help. I even spoke to one woman Wednesday who works nearby and recalled how she cradled Mrs. Fong and the other woman while emergency crews arrived.

Thompson has a criminal background including assault with a deadly weapon likely to cause great bodily injury from 2017 and 2019. Records provided to me show Thompson was let out on mental health diversion in the fall of 2020. He was supposed to be behind bars for his previous charges for 25-years to life.

I myself have only watched this video three times because it is simply too much to bear. That anger and deep sadness I felt was shared by another member of our editorial team who viewed it and helped decide if anything needed to be blurred. We decided it did not need to be.

Mrs. Fong's family knows why we chose to share. As grandson Drew told me during one of our correspondences over the past couple of days: "...we need to put as much pressure as possible to get this guy prosecuted."

I will channel this feeling of pain and outrage into continuing the fight to bring the truth.

Chui Fong's family has set up a GoFundMe to help pay for medical expenses.