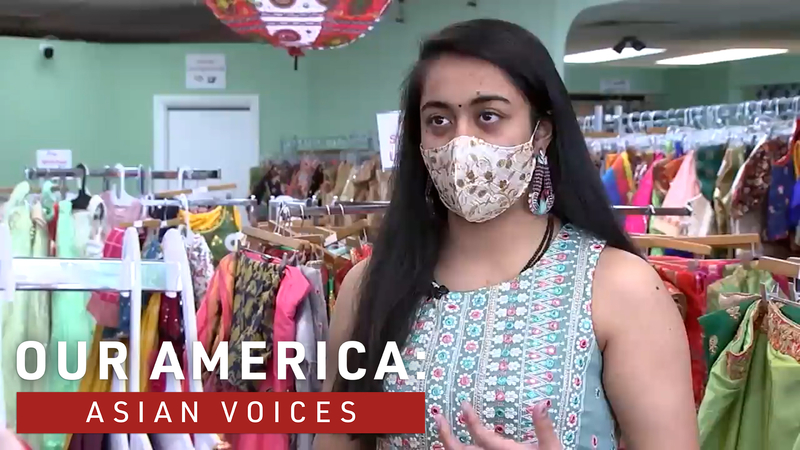 EXTON, Pa. -- Inside a shopping center in the small town of Exton, Pennsylvania sits a shop that seems like it's from the other side of the world. Rich colors and fabrics hang on racks and walls throughout Maa Shakti Boutique. On those racks hang clothing for just about every holiday celebrated in just about every part of India.

"It's not easy because we do want to make sure we carry something for all the different holidays, all the different types of people of India," said Armi Patel, whose parents opened the shop in 2020 after sewing traditional Indian garments in their home for years.

The demand is high because the Indian population is rising in Pennsylvania. Exton is one small community that has seen a spike in the number of Indian immigrants moving to the area.

"Pennsylvania is definitely growing at a fast rate because of its close proximity to New York, New Jersey where you will find a lot of Indians settling down. It is one of the biggest hubs, really," said Anjali Sahay, who is a commissioner on the Pennsylvania Governor's Advisory Commission on Asian Pacific American Affairs.

The Philadelphia region ranks in the top 10 Indian populations across the United States: New York, Chicago and San Francisco are the top three. Philadelphia is number nine.

Nearly 128,000 Indian people live in the Philadelphia region, which encompasses parts of New Jersey and Delaware. They represent 35% of the total Asian American population in that region.

Twenty-one years ago, the Asian Indian population in America was less than two million. Experts believe that number has now doubled.

"It is approximately four million strong at this point. We're waiting on the actual census count," said Sahay.

It's a number Narasimha Shenoy never could have imagined when he came to the U.S. in 1972 as an engineering student.

"As far as I knew, at that time, I was the only Indian there," he said of his first neighborhood in Pennsylvania. He's watched the population growth and has become a leader in the Philadelphia Indian community, serving as president and CEO of the Asian American Chamber of Commerce of Greater Philadelphia.

Shenoy's move to Pennsylvania as a young engineer foreshadowed what was to come: a tech boom that has spiked in recent decades. Shenoy says many of the Indian immigrants who come to the US do so on H1B visas, which bring highly skilled workers to the U.S.

Anaurag Jain was part of that tech boom when he moved to the U.S. shortly after getting married.

After working in the engineering field, he co-founded a company called Prepay Nation, which allows people to send cell phone credits to loved ones in other countries. Jain founded his company using the knowledge that many people in India and other countries outside the U.S. rely on pre-paid cell service. Oftentimes, family members who move to the U.S. are able to help pay for that service.

"I've worked with a lot of people who come here and still support their family and extended family," said Jain.

"Indians tend to be very entrepreneurial as well, and that has a spillover effect on the local economy," said Sahay.

Shenoy agrees, stating that Indian people in the area touch nearly every facet of life.

"Your kids go to college, there's a professor, an Indian, in college. You go to the doctor you're likely to bump into an Indian doctor," he said.

Patel's family feels like they've been embraced by the Exton community since moving there in 2008. Both Indian and non-Indian residents helped support the boutique during the pandemic by purchasing custom masks made of fabric from India. Patel's parents sewed each mask by hand. The hard work they've put in since coming to the U.S. is not lost on their daughter.

"It's inspiring," she said. "That's a lot of work they're putting in."